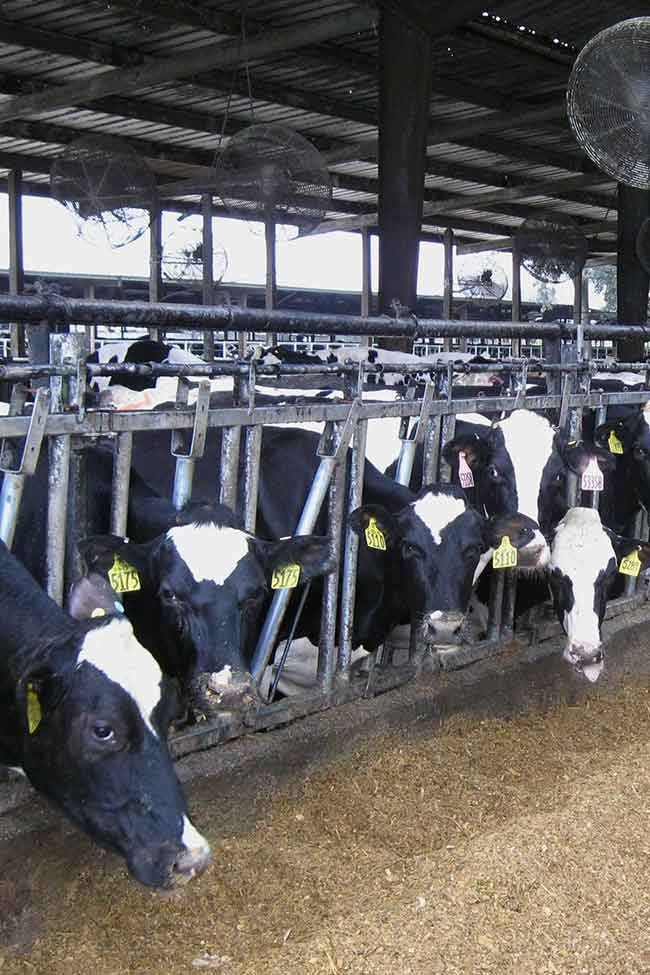 Alliance Dairies treats all the manure generated at its large, Trenton, Florida-based dairy in a DVO anaerobic digester prior to land application. Contributed photos

Authorities recently removed the Florida manatee from the endangered species list. Farm businesses like Trenton-based Alliance Dairies may have played a small but important part in this success story because of its mission to control its water usage and nutrient runoff.

The United States Fish and Wildlife Department says that preservation of habitat is largely responsible for a 500 percent increase in the manatee population since 1972. Alliance Dairies manages a herd of 6,100 milking and dry cows and 6,500 replacement heifers. It is located in the highly sensitive Suwannee River Basin and Manatee Springs region. The milking and dry cows are housed in barns while the replacement heifers are raised on pasture. The dairy has partnered with the Suwannee River Water Management District’s water conservation program to ensure that its water use and nutrient drainage from cropland have a minimal impact on the local environment. Groundwater wells on and surrounding the dairy are constantly monitored to ensure that it is not having an adverse impact on this resource.

Recently, Alliance Dairies installed an $8.5 million anaerobic digester, which has significantly reduced its fresh water usage, reduced the amount of raw manure applied on its cropland, allowed it to capture biogas for the production of green power, and reduced odor coming from the farm.

Alliance Dairies’ office manager, Charles Smith, says the dairy installed an anaerobic digester to treat its manure mainly because it felt that the technology had advanced sufficiently to prove its worth.

“Our digester is designed by DVO in Wisconsin and they had about 100 of these in operation,” Smith says. “We felt like we weren’t going to be a guinea pig and with the rising cost of electricity, we felt that this was a good way to go.”

As far as benefits to the environment, he adds that runoff from the dairy is tightly monitored with groundwater compliance wells because of the sandy soil in that area.

“I like to say that it is kind of like farming at the beach,” he says. “It is kind of like hydroponic gardening because the sand has very little inherent capacity and we are growing 23 ton per acre corn fertilized exclusively with manure.”

More than the installation of the digester, he credits their crop rotation method, both pre- and post-digester construction, as their main nutrient control method on their land base because the nutrients are taken up quickly by the crops.

Alliance Dairies was established in 1990 and is owned by Ron St. John and Sandy McArthur. It is the largest free-stall dairy in Florida. The dairy manages 13 barns in one general area. St. John is a transplanted New Yorker who moved to Florida in the mid-1980s while McArthur is a significant Florida landowner. The two formed a business partnership and established the dairy from scratch. The dairy has grown substantially over the years, and the recent acquisition of another dairy across the road from the main farm has created an opportunity to expand to as many as 8,750 milking and dry cows. There is a plan in place to build a rotary parlor over the next few years. This acquisition has also provided the dairy with additional cropland to apply its high nutrient liquid and treated solid byproducts from the digester as organic fertilizer. They use sand bedding in their barns.

Alliance Dairies plants crops on about 2,100 acres on sprayfield largely for cattle feed. The dairy triple crops corn, sorghum and a winter crop of ryegrass, oats, or triticale.

The dairy’s DVO, two-stage, mixed plug flow methane anaerobic digester was installed in 2012. The use of biogas from the digester to produce power has helped the dairy reduce its electricity costs, and because the system allows the dairy to recycle a high percentage of its water, the only fresh water used on the farm is for cooling, drinking and cleaning.

The power from the dairy’s one-megawatt-per-hour generator provides it with about 70 percent of its daily needs and is the equivalent of providing the annual power needs of about 425 homes. It is wheeled through the local utility, Central Florida Electric, which then provides them with a credit on their power bill. The dairy estimates that it produces between $65,000 and $70,000 worth of power per month.

“The energy savings are only a portion of the benefits we’ve seen from the digester, and after approximately eight years, those savings alone will pay for the entire project,” says Jan Henderson, chief financial officer at Alliance Dairies.

The farm’s dry cows are situated in five of the 13 barns, located at the recently acquired dairy across the road. Until recently, the manure in these barns was scraped, collected and land applied, but Alliance Dairies has launched an improvement project to convert those barns from a manure scraping system to a flush system, while installing a pipeline over the 1.5 mile distance to transport the manure from this site to the anaerobic digester at the main farm site.

Smith says prior to installation of the anaerobic digester, the manure from the dairy was collected in two, huge, dewatering cells. The liquid traveled through a weeping wall and solids were collected in the concrete-lined cells then land applied. The liquid was applied to crops using an overhead sprinkler irrigation system.

“We have always used the nutrients to grow crops,” he says. “That’s part of our comprehensive nutrient management plan that allows us to milk this number of cows because we have the land base to spread those nutrients out in an agronomically acceptable manner.”

Although the digester tanks take up a large area, capable of holding seven million gallons of manure at one time, they aren’t particularly noticeable because most of the installation is underground. The two insulated tanks are 16-feet deep, 464-feet long and 165-feet wide in total. They contain 14-feet of manure slurry, with the biogas collected and captured from the top two feet of the tank.

As the sand-laden manure flows down main street, it traverses across a large, concrete slab where most of the sand settles out. The manure continues down what the dairy calls the one-quarter percent slope “sand lane” where more of the sand settles out and is collected from the lane with a frontend loader. The recycled sand undergoes a rigorous monitoring and turning process before it is reused as bedding.

“We recycle about 80 percent of our sand,” Smith says. “Clean, dry sand is the gold standard for dairy cows. They love it.”

The sand that ends up in the digester tends to be very fine material that so far does not seem to be settling to the bottom of the digester tanks.

Once past the sand lane, the manure-laden effluent passes through two U.S. Farm Systems separation screens to capture solids, which are discharged into a mixing pit. A high percentage of the liquid stream is recycled through the barn cleaning process. The mixing pit contains some liquids for mixing with the solids for consistent flow through. It is equipped with a Vaughn agitator to create a consistent slurry prior to it entering the digester tank. Probes within the mixing tank measure the volume and once it reaches a specified height, it discharges into the digester. The process is continuous.

After treatment for 21 days in the digester, the treated effluent is discharged into a common pit and undergoes a fine screening through four U.S. Farm Systems screen separators to remove a high percentage of the treated solids. The liquid effluent is land applied almost immediately through an irrigation system as organic fertilizer. The treated solids are also collected and land applied as fertilizer. Part of the old dewatering system is now used as the solids collection pit. The solids are land applied a couple days a week using Kuhn Knight and Artex manure spreaders.

The collected biogas is cleaned through a scrubber to remove the hydrogen sulfide and is burned in a Caterpillar engine driving a power turbine. It is a recent replacement for the original Spanish-manufactured engine installed with the system that had performance issues burning the biogas fuel.

Smith says the dairy is unique in how it processes its treated effluent through fine screens before it is land applied. Rather than the liquid stream being land applied through a typical broadcast-type pivot head on the irrigation system, they have installed what he described as, “drops on the pivots. The drops have a much smaller orifice and require us to clean up all the solids. They use less electric power and they water the crop more evenly than broadcast-type sprinklers. The screen separators are pressure washed once a day.”

He believes they are the only dairy in the United States land applying the treated effluent in this way.

Whether in liquid or solid form, the dairy’s land is constantly being fertilized with the digester byproducts because the land is constantly producing a crop. The dairy works with a consultant who monitors the application rate and makes recommendations on adjustments as needed.

“I think it [digester] is a technology that more dairy farms will pick up on,” Smith says.

He says once the system is in place, it works quite well.

The dairy is recording the number of carbon credits that the system is generating and is close to monetizing them as another income stream. Alliance Dairies already has a contract signed with BP to purchase the carbon credits once it clears all the hoops with the California Air Resource Board to qualify the credits.