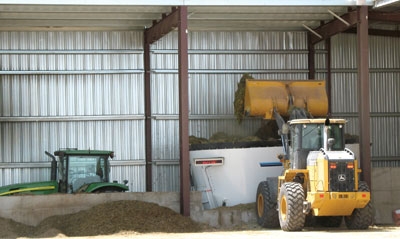 Reducing phosphorus in dairy diets doesn’t change a cow’s productivity, but it does affect the environmental impact that cow might have, according to a Texas AgriLife Extension Service specialist.

Dr. Ellen Jordan, AgriLife Extension dairy specialist in Dallas, Texas, said she has long worked with nutrition consultants on reducing ration phosphorus so the phosphorus excretion is reduced, thereby protecting the environment. Too much phosphorus in runoff can cause algal blooms.

This long-term effort seems to be paying off, Dr. Jordan said. Working with other AgriLife Extension dairy personnel, their research has shown no production or animal well-being impact caused by the reduction of phosphorus.

In 1999, nutritionists in the region were surveyed regarding their ration formulation strategies, Dr. Jordan said. They indicated the average formulated level of phosphorus for high-producing cows was 30 percent above recommended levels and for low-producing cows it was nearly 20 percent above what was needed.

The same question was asked of nutritionists at this year’s Mid-South Ruminant Nutrition Conference in Grapevine. The average formulated levels for both high- and low-producing cows had declined to recommended levels, she said.

“This reduction not only protects the environment, but reduces the ration cost by decreasing phosphorus supplementation costs,” Dr. Jordan said. “Because the fertilizer is lower in phosphorus, it could also decrease the cost required for agronomic application because it can be spread over fewer acres.”

Since that initial survey, Dr. Jordan has been explaining at dairy cattle reproduction meetings that the ongoing research results from across the nation are indicating there are no reproductive advantages to feeding more than the recommended levels of phosphorus.

Dr. Jordan also worked through the Texas Animal Nutrition Council to get the council to draft a resolution stating, in part, “Our members formulate rations for their clients’ herds with the lowest level of phosphorus possible consistent with animal health and productivity. This is based on state and national research demonstrating that minimizing dietary phosphorus will reduce manure phosphorus excretion without being detrimental to animal health and production.

“One stumbling block in implementation of the reduced levels has been that when veterinarians are troubleshooting reproduction problems, they have run a metabolic profile on cows near calving,” Dr. Jordan said. “When the cow’s levels are on the low end of normal, veterinarians have expressed concern about ration phosphorus being too low.”

This area – the metabolic profile of the dairy cow – is the subject of the doctorate work of Kevin Lager, AgriLife Extension associate in Canyon.