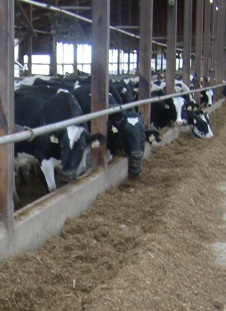 These anaerobic digesters are large, cement tanks outside the barn, mostly underground, which capture the cows’ waste. This step greatly reduces odor from the dairy operation. When manure breaks down, it creates a biogas, which is primarily methane. The methane rises to the top of the tank and is captured.

Methane is a greenhouse gas which, when released into the atmosphere, is 23 times more potent than carbon dioxide. Once captured, the methane is typically destroyed through “flaring,” during which it is burned through a flame that flares out the end of a pipe. The business earns carbon offsets or carbon reduction credits based on the amount of methane destroyed in the process, which is measured by a third party.

“These dairy operations went one step further and decided to destroy the methane by burning it in internal combustion engines, rather than simply flaring it,” said Mark Rathbun, renewable energy project leader for Great River Energy, the wholesale power supplier to 28 member distribution cooperatives across Minnesota.

Each farm will generate approximately 14,000 megawatt-hours of electricity each year, which is enough to meet the annual energy needs of about 1,400 homes. Liquids left over from the biological breakdown of the manure have less odor and can be used as fertilizer for crops. Solids left over have no bacteria and can be used as bedding. Waste heat from the generators is captured and used to aid the biological process in the digester.

According to the Environmental Protection Agency Climate Leaders white paper published in 2006, of 92,000 dairy operations in the United States, only 1.7 percent had more than 500 head of cows and only 62 made use of anaerobic digester systems.