Integrated agricultural systems often have both crops and livestock on the same farm. And, yes, integrated crop-livestock systems can have many benefits. 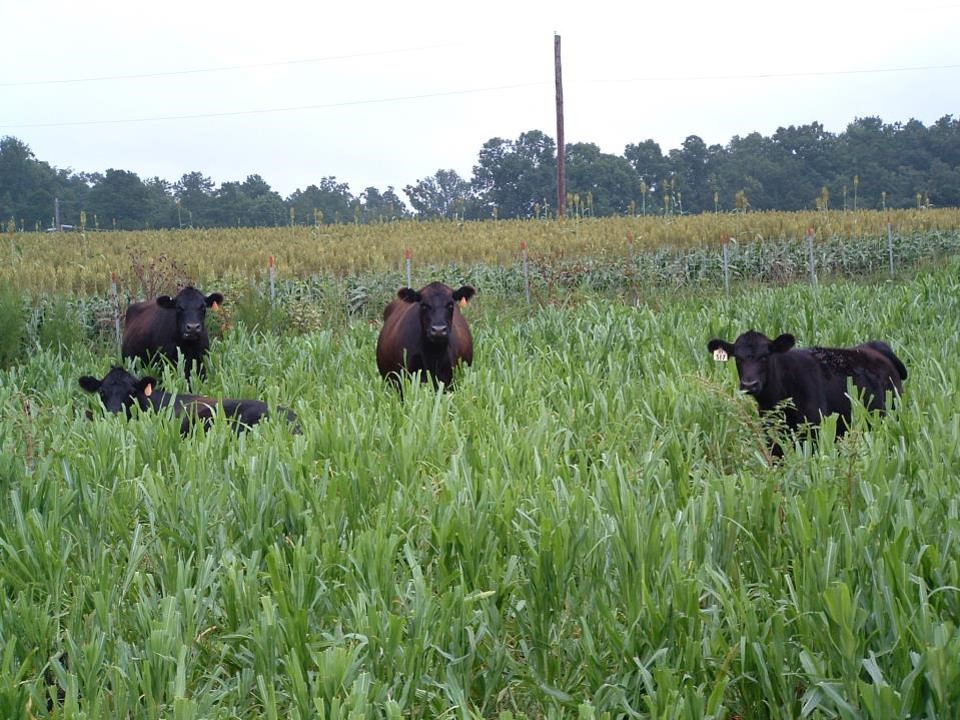 Mature cows are grazing pearl millet cover crop in the foreground. Grain sorghum for cash cropping is shown in the background. Alan Franzluebbers

Years ago, it was tradition for farmers to grow a variety of crops on their farm. There was limited food distribution to large grocery stores, and most of the food was grown locally. So, a farmer could be cropping cotton and sweet potatoes in one area of their farm. On another area, graze beef cattle, dairy, or chickens on forage crops like annual clovers, perennial tall fescue, wheat pasture, and native rangeland.

Pastures and hayland were rotated with crops so that the same enterprise was not on the same field year after year. Diversity of enterprises on each farm helped create stability in the production system.

With the advent of large farming equipment and commercial fertilizers following World War II, it became more efficient from a labor standpoint to grow the same types of crop year after year.

After investing in equipment to handle a particular crop like corn, farmers often became more specialized. This led to monoculture cropping, which can have positive effects on yields and efficiency. But, monoculture has some drawbacks, including environmental and social concerns.

The need for greater nutrient inputs with monoculture can lead to poor water quality underground or from run-off. Confined operations have the issue of disposing of large volumes of manure.

Interest in re-integrating farms to take advantage of the synergies between crops and livestock has increased in the past few decades. Our lab has embarked on researching such integrated systems as a way to improve agricultural sustainability.

Crop-pasture rotations are part of an integrated system. Farmers can match the energy and nutrient flows of different enterprises (i.e. types of livestock and types of crops) to meet the desired outcomes.

Ruminant livestock consume forages, often on pasture by themselves during much of the year. Animal manures are deposited directly on the land where they graze. Alternatively, they can be confined in areas during parts of the year with conserved forages, e.g. hay or silage.

Manures can also be collected from confinement areas and applied to cropland. This recycles and effectively utilizes nutrients throughout the entire system and can substantially reduce chemical fertilizer needs for cropping.

Forage grasses used for grazing often have extensive, fibrous root systems. These roots hold soil particles together. All plants take carbon dioxide from the air and convert it into simple sugars during photosynthesis.

Compared with annual crops, forage grasses form a thick mat over the soil, and can enrich the amount of carbon in soil more than annual crops. Forage legumes are capable of converting nitrogen from the atmosphere and add nitrogen to the soil as well.

The large gain in soil organic carbon under perennial pastures is a key benefit of integrated crop-livestock systems.

Pasturing is also an important adaptation strategy to overcome drought. Pastures can partially control flooding by improving water infiltration and soil health. Forage and grazing lands have historically provided a sustainable and resilient land cover. Grazing lands are rooted by a variety of grasses and forbs that serve to provide essential ecosystem services:

Integrated agricultural systems have the potential to adapt to weather extremes. This can make them more climate-resilient than monoculture systems. For example, integrated crop-livestock systems rely on forages as part of a diversity of crop choices. These forages provide a large benefit for positive balance of carbon stored in soil. Crops grown in rotation with forages can be more profitable, since yields are often enhanced and costly fertilizer inputs can be lower. The presence of forages can reduce nutrient runoff and reduce nitrous oxide emissions.1

The diversity of farming operations in integrated crop-livestock systems reduces the overall risk of failure. By having several different crops on a farm, the risk of any one component failing is reduced.

Diverse agricultural systems that include livestock, perennial grasses and legumes, and a wide variety of annual forages offer enhanced agro-ecosystem resilience in the face of uncertain climate and market conditions.

Indeed, there are many good reasons why a diversity of crops and livestock should be produced on the same farm and even the same field within a farm.

Related
What is the value of farmyard manure?
Turkey farming with sustainability in mind
Are Colorado’s feedlots a risk to waterways?
New cattle feed supplement has methane falling and optimism rising
Tags