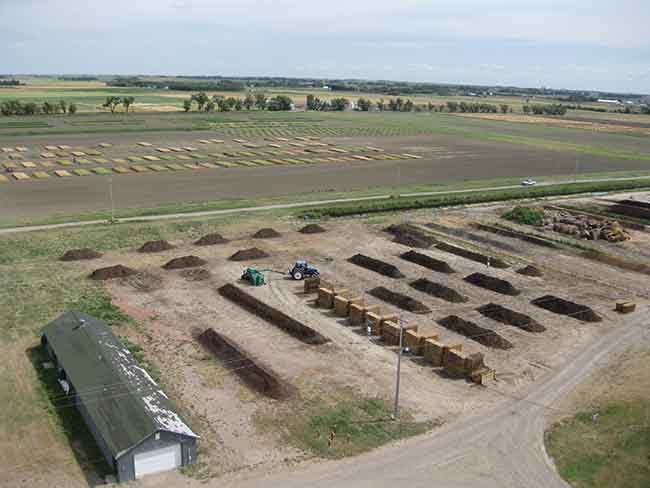 An overhead view of the Agriculture and Agri-Food Canada facility where researchers are studying composting and stockpiling manure. Contributed photo

An overhead view of the Agriculture and Agri-Food Canada facility where researchers are studying composting and stockpiling manure. Photo by Contributed photo

In North America, antibiotics are routinely administered to livestock for treating cases of disease and in some jurisdictions, they are given at sub-therapeutic levels to prevent disease, improve feed efficiency and promote growth. Manure can contain antibiotic-resistant bacteria, and it’s well known that some manure management practices destroy these bacteria, but does one stand out? Does stockpiling do a better job than composting, and are there other factors that should be considered in your decision to use one method over the other?

But before we get to their results on stockpiling versus composting, let’s go over some facts you should know about antibiotic-resistant bacteria.

“It’s found in all soil,” McAllister explains. “Antibiotic resistance has always existed. Antibiotics are produced by many bacteria to protect themselves from other bacteria, and those bacteria need to be resistant to their own antibiotics or they will harm themselves. The populations they are defending themselves against also become resistant over time. These bacteria are found in the soil, inside animals such as cattle and in many other environments.”

So, whether or not antibiotics are added to an animal’s diet, antibiotic-resistant bacteria will be found in that animal’s digestive tract and in its manure. Resistance is a fact, and it’s only a matter of when it develops, in which bacteria and under what circumstances. McAllister understands that while “it’s still a common perception that the prevalence and magnitude of antimicrobial resistance in our environment is related to feeding antimicrobials to beef cattle, we’ve actually found that in several cases, manure from cattle that were not administered antimicrobials contained higher numbers of resistance genes than manure from animals fed antimicrobials.”

The good news is that it’s not likely that antibiotic-resistant bacteria in the soil, either naturally occurring or placed there through the spread of manure, pose a significant risk to human health. For that, McAllister says they would have to exchange DNA with other bacteria that could cause human infections, and that would be difficult since most human pathogens don’t survive outside the human environment, or survive for long.

Composting manure involves turning long piles (windrows) at least three times over the composting period with the objective of the temperature uniformly staying at, or higher than, 131 Fahrenheit (55 Celsius) for as long a period as possible (at least 15 days desirable). Turning of compost also breaks up aggregates, increases porosity, redistributes moisture and promotes the microbial decomposition of organic matter. Stockpiling has been described as ‘passive composting,’ with manure being placed in large pyramidal piles on the ground or on a concrete pad. Stockpiled manure is not mechanically turned or mixed, leading to regions of anaerobic decomposition. Stockpiling cannot achieve the high temperatures associated with composting and results in a shorter period of internal pile heating.

McAllister’s team found that in terms of their ability to kill off pathogens and degrade antibiotic resistant genes, composting provides better results. McAllister believes farmers should definitely do one or the other.

“Stockpiling…doesn’t require any equipment other than a loader, which every farmer already has,” he notes. “So stockpiling is a no-brainer for manure management. Letting manure sit at least a month should be standard practice. It also has the economic advantage of lowering the volume of manure that needs to be delivered to the field.”

Composting has more costs, he says, but can be worthwhile.

“There are investments needed in capital equipment costs, and in ongoing time and labour, but if you have a market nearby, a big city where you can sell composted manure for a good price, you can potentially make an ongoing profit.” [See sidebar for more]

Composting or stockpiling aside, another matter of individual choice is deciding whether to spread your manure on your fields. Spreading it certainly won’t add to the prevalence of antibiotic resistance that is already found in the soil, but McAllister says it doesn’t always make sense financially.

“You are adding organic matter when you spread your manure, but manure is high in phosphorus, so likely you will have to add N anyway in a separate spreading to balance out the N-P ratio,” he explains. “So, sometimes it’s easier for farmers to just use chemical fertilizer instead of manure. It’s each producer’s decision.”

And if you are wondering about what’s occurring with antibiotics added to animal feed that could impact human health, McAllister can also provide an update on that.

“Some antibiotics are already considered not safe to include in feed and regulations are in place and followed to prevent this practice, but we need more studies on the antibiotics that are presently approved,” he says. “It’s not in the best interest of animals to take away those antibiotics that help them get better from an infection or protect their health. The important thing to remember – and we haven’t published too much about this – is that we’re finding that the populations of bacteria that live in the environment are different than those that live in an animal. And there are certainly many manure management and food safety practices that we can use to reduce risk to human health, and many [of these practices] are already part of best management practices.”

Markets for composted manure
Composting on a large scale can be profitable for farmers but is a full-time job, says Van Doan, agri-resource engineer at Manitoba Agriculture, Food and Rural Development.

“Most beef farmers are farmers first…[they compost] for the volume reduction and odor reduction. Plus, if they land-apply the composted manure, they find it’s improving their soil tilth.”

Overton Environmental Enterprises compost site manager Gerry Dubé agrees. The Winnipeg-based firm composts by-products from several large companies (such as a potato processor and the Winnipeg horse racing track) and sells it to the public, and also helps several farmers compost their own manure, from those who want to sell manure to those who want to use it on their fields to reduce or eliminate fertilizer and chemical use.

“We are trying to convince farmers that composting and spreading composted manure creates a vibrant soil biology and also sequesters carbon,” says Dubé. “They need a better understanding of the whole process and they also need an incentive from the federal government to help them transition from using large amounts of fertilizer and herbicides to this more-environmentally friendly type of farming. The incentive would fit well with the desires of the federal government to reduce carbon going into the atmosphere.”