Not all compost is created equal. Farmers need to understand how to produce and/or choose composts that increase soil’s water holding capacity 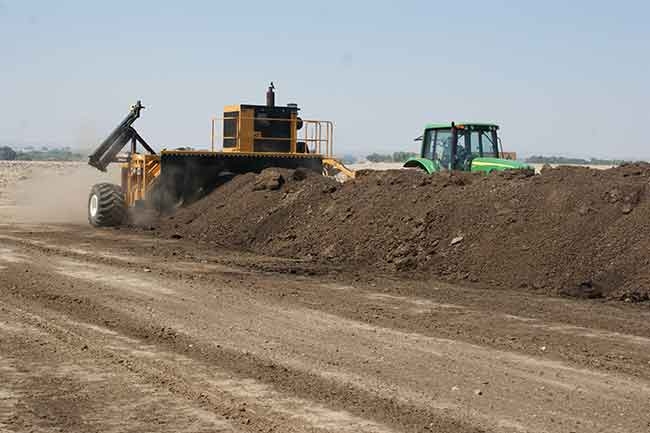 Compost is an earthy-smelling, humus-like material that is a product of the controlled aerobic decay of organic nitrogen (such as manure) and carbon (such as sawdust, straw or leaves). One advantage of compost is its ability to hold moisture. The focus of this article is to understand how to choose composts that increase the soil’s water holding capacity.

It is important to understand at the outset that not all composts are alike. For example, composts made from manure are not the same as composts made from leaves. The nutrient content, microorganism diversity and population, cation exchange capacity and water holding capacity of compost can be different based on the feedstocks used to make the compost, the process used to make the compost and the maturity of the compost at the time of application. Therefore, it is important to understand the quality of compost before using it to ensure you get the intended benefit you are seeking.

Soil scientists report that for every one percent of organic matter content, the soil can hold 16,500 gallons of plant-available water per acre of soil down to one foot deep. That is roughly 1.5 quarts of water per cubic foot of soil for each percent of organic matter, according to Sullivan in “Drought Resistant Soil. Agronomy Technical Note. Appropriate Technology Transfer for Rural Areas” at the National Center for Appropriate Technologies in 2002. Increasing the organic matter content from one to two percent would increase the volume of water to three quarts per cubic foot of soil. Rodale Institute presenters, on the other hand, assume that one pound of carbon can hold up to 40 pounds of water. That calculates out to be approximately 38,445 gallons of total water per acre six inches deep. The point here is that organic matter holds a lot of water, thus, the amount of organic matter in a soil directly influences the availability of water to a crop over time. However, organic matter in droughty soils breaks down so rapidly that getting above two or three percent is difficult to do, but getting to two to three percent can have major positive impacts.

A 1994 study by A. Maynard found that a three-inch layer of leaf compost rototilled to a six-inch depth increased water holding capacity 2.5 times that of a native sandy soil and provided almost a seven day supply of plant available water. In a 2000 study, Maynard found that increasing the water holding capacity of the soil by adding compost helped all crops during summer droughts by reducing periods of water stress. The amount of water in a plow layer (eight inches) of the compost amended soil increased to 1.9 inches compared with 1.3 inches in unamended soil. Since vegetables require one inch of water a week, at field capacity, the compost amended soil held a two-week supply of water.

The U.S. Compost Council (2008) has stated that the frequency and intensity of irrigation may be reduced because of the drought resistance and efficient water use characteristics of compost. Compost reduces soil crusting, which helps with water absorption and penetration into the soil. Recent research suggests that the addition of compost in sandy soils can facilitate moisture dispersion by allowing water to more readily move laterally from its point of application.

For most cropland in Michigan, this means that low amounts of compost will be applied, so choosing composts high in organic matter is critical if increasing soil water holding capacity is your goal.

According to the U.S. Compost Council’s Field Guide to Compost Use, farmers should choose composts that have an organic matter content between 50 to 60 percent and a water holding capacity of 100 percent or higher.

When purchasing compost, ask to see an analysis to verify organic matter content and water holding capacity. Commercial sources of compost in Michigan can be found at the FindAComposter.com website.