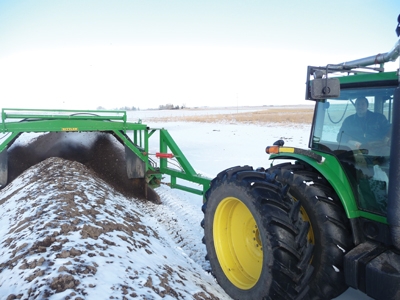 A Sittler compost turner is an essential piece of equipment in Harold Perry's composting operation. Contributed

Southern Alberta is cattle country but it is also home to a significant agricultural industry where specialty crops are grown. The Kasko Cattle Company, located near the town of Taber, is one example of both industries working together to benefit from the manure generated by the feedlot’s cattle.

The 10-quarter sections of land surrounding the feedlot are owned by feedlot proprietor Ryan Kasko plus Harold Perry and Chris Perry. The feedlot raises about 14,000 head of cattle annually. While Ryan owns and operates the feedlot, the Perry family, which includes Harold and Chris’ father, Gerald, has expertise in producing crops such as potatoes, sunflowers and peas on 4,600 owned and rented acres close to the town of Chin, about 40 kilometers from the feedlot. They have a contract to produce 13,500 tonnes of potatoes for Frito Lay and 8,500 tonnes of potatoes for McCain Foods on about 1,300 acres that are under irrigation for that purpose. They also grow peas for Lucerne as well as some sunflowers, hay and oats. The area around Chin has a hot, dry climate requiring irrigation, with plenty of frost-free days.

The Perrys have used cattle manure compost as fertilizer in their potato growing operation on their own land for the past decade because of the nutrient and microbial benefits they’ve realized from using it. Harold says they observed with growing potatoes on virgin potato growing soil versus soil that had been under cultivation previously in a four-year potato crop rotation that there was a dropoff in potato production on soil where potatoes had been grown in the past. They discovered that by using compost on the potato rotation land, it not only provided organic fertilizer to the crop but also worked as an excellent soil amendment, adding many micronutrient and biological unknowns to the overall quality of potato growing land that really made a difference in commercial potato production.

“We wanted to try compost because that is the natural way that things work,” says Perry. “When the buffalo were here, they ate and manured the grass at the same time, and that’s how the natural cycle worked. Fertilizer prices have also helped because compost makes sense if you go strictly by dollars. The cost of putting the amount of nutrients you put on your soil using compost is less than if you were to purchase that at a fertilizer dealership.”

Not all the land on which they grow potatoes is fertilized with compost – only the land they own. Because potatoes must be grown on a four-year land rotation, it is essential that the Perrys participate in a land exchange program with other farmers to meet their production obligations. They exchange use of some of their farmland with other farmers to maintain that four-year potato crop rotation. Because they have no control over other people’s land, raw manure from area feedlots, including some from Kasko Cattle Company is typically applied on land owned by other farmers where the Perrys grow potatoes as part of the exchange program.

Until last year, the Perrys purchased the compost fertilizer used on their land from a commercial supplier. Because of compost quality issues, they invested in land surrounding the Taber area feedlot with Ryan Kasko partly to acquire their own supply of raw cattle manure to manufacture their own compost. While they were getting good service from their commercial compost provider, compost quality from cattle manure gathered from feedlots in southern Alberta generally has suffered recently because of considerable rain and snow in the area. A lot more clay is being mixed in with the manure simply because the ground cover in area feedlot corrals has been a lot wetter, resulting in more dirt and clay in the manure gathered to make compost. The Perrys were concerned about adding clay to their potato cropland and decided to try their hand at compost production themselves. The Taber feedlot and surrounding land happened to come up for sale near their potato growing operations, so all the pieces conveniently fell into place.

Having their own raw manure source gave them more control over converting the manure to compost. For example, when the quality of the manure delivered is questionable, Harold can take action to improve its quality or set it aside completely, which he couldn’t do when they purchased compost from a supplier. He now has more control over the final quality of compost used on their potato fields, no matter what kind of weather the area experiences.

“If I have a goal, it’s to have healthier soils, for healthier crops, for a healthier population,” says Harold.

In addition to the micronutrient and biological value that compost provides to soil, he says that there are also financial advantages to transporting compost versus raw manure.

“Good compost has about 60 percent of the weight of raw manure,” says Perry. “So if you get too far away from the feedlot, then the trucking just kills you.”

He adds that composting the manure prior to application is a rather specialized requirement of farmers like the Perry potato growing operation and without that demand, the raw manure would likely continue to be land applied as has traditionally been the case. However, he agrees with Perry that because of the weight factor, converting the manure to compost could make sense should there be more manure generated by feedlots than area land can support and it needs to be transported longer distances.

Last year, the custom manure contractor created the windrows by using conventional manure spreader trucks, which moved more slowly than they typically would in a field to deposit the manure. The manure was processed through spreader beaters as it was put in the windrows, which mixed more air into the piles. Perry says this helped the composting process. Delivery of the manure resulted in four windrows measuring a distance of about half a kilometer each.

Once the windrows were created, Perry began monitoring the conversion process and using his new compost turning equipment as needed. He acknowledges being a bit anxious about delving into compost production because of the science required to ensure that the biological organisms have a healthy environment to carry out the conversion process, but adds that learning to compost has also been an enjoyable experience. To prepare himself, he took a composting course offered by Midwest BioSystems. He manufactured about 7,500 tonnes last year, with the process taking from July to mid-October. The compost was land applied in October, worked in, and then the potato hills were created for next year’s planting.

To turn the compost, Perry purchased a 14-foot-wide, pull-type, Sittler compost turner, which retails for about $45,000 Cdn. He was able to recoup about half the cost by applying to a government program called the Growing Forward Manure Management Program. He checked the heat and moisture content in the composting windrows regularly to ensure that the organisms were working in an optimum environment. He also purchased a Sittler water wagon that can be towed along with the compost turner so that moisture can be applied to the windrows as needed.

Perry says he turned the compost six or seven times with the main determining factor being when the temperature in the compost heap reached 160 F. At the beginning, the turning was done every four or five days because of the strong biological activity underway. Ideally, the conversion process should take 10 weeks, but Perry says he prefers to wait 16 to 20 weeks.

As part of the Perrys’ adventure into composting, they hired an agriculture consultant from Sunrise Ag in Taber to soil sample and develop topography maps to help determine how much compost should be applied in various points on their cropland. The consultant developed maps showing six zones where the compost should be applied to a lesser or greater extent to achieve ideal growing potential. The Perrys plan to use the maps to place their compost more precisely this coming year. To spread the compost, Perry has purchased a Bunning compost spreader with vertical beaters, which he pulls using a John Deere 8430 tractor equipped with hydrostatic drive. Perry recommends a tractor in the 180- to 200-horsepower range. The tractor moves at about 16 kilometers per hour, and the spreader broadcasts the compost over a width of about 40 feet. This results in an application rate of about four tonnes per acre. Increasing or decreasing tractor speed based upon the zone mapping displayed in the cab will increase or decrease the application rate.

Composting is just one way that the Perrys are making better use of cattle manure. Harold and Chris are planning to build an anaerobic digester on their farm that will process cattle manure, rotting potatoes and possibly green bin waste from the nearby town of Coaldale to produce methane gas. The gas will be used to power an engine to generate 640 kilowatts of electricity. The plan is to put about 55 tonnes of biological material into the digester per day, which will create 35 tonnes of digested material that is similar to compost annually, which the Perrys will also spread on their land. Construction is slated to begin in 2012.