Under current rules and regulations, the animal capacity and land base of both farms may together constitute a large CAFO 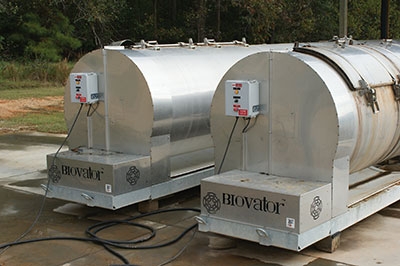 When a farmer moves dead animals from one Michigan farm to another, it results in the nutrients of one farm being transferred to another. The two farms are then considered one large CAFO. Margaret Land

During a recent Michigan State University Extension program, a Michigan farmer shared that he owns a swine operation with animals on two different farms, located several miles apart. The farmer hauls his dead animals from one farm to the other where he recently installed a rotary drum composter for mortality handling. Individually, neither farm is considered a large confined animal feeding operation (CAFO), and neither is currently permitted by the Michigan Department of Environmental Quality (MDEQ). Each has its own land base for spreading manure and its own nutrient management plan.

The farmer knew that his mortality management plan, which includes combining mortalities, was in compliance with the Bodies of Dead Animals Act in Michigan. However, the MDEQ informed the farmer that since he was moving the dead animals from one farm to the other farm, his mortality management plan resulted in the comingling of production area waste. Because nutrients of one farm are being transferred to another, the two farms are considered one large CAFO. He was advised that he needed to apply for a National Pollutant Discharge Elimination System (NPDES) permit, but the farmer wondered if he was given the correct information and asked: “Is this correct?”

“Yes” is the answer to the farmer’s question. Under current rules and regulations, when dead animals are composted together at one farm, the animal capacity and land base of both farms may together constitute a large CAFO. This swine operation, on two farms, would need to apply for a CAFO NPDES permit if the combined capacity was greater than 2,500 swine each weighing 55 pounds or more.

The Bodies of Dead Animals Act 239 of 1982 (BODA) states that “composting methods shall be used to compost only the normal natural daily mortality associated with an animal production unit under common ownership or management.” Historically, this has allowed mortality from different farms under common production management and ownership to be composted at a shared facility located at one farm. The law is intended to allow for the economical, effective and safe management of a farm’s mortality.

Representatives from MDEQ, MSU Extension, Michigan Natural Resources Conservation Service and the Michigan Department of Agriculture and Rural Development have discussed why BODA and NREPA place a multiple-site operation under common ownership and sharing a common composting facility into a permitted CAFO situation. The outcome of that discussion is available in a “BODA-NREPA Mortality Composting Briefing,” available online.