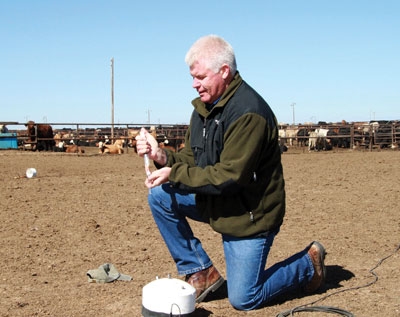 Getting an accurate estimation of nitrous oxide and methane emissions from beef cattle feedlots is an increasing concern given the current and potential future reporting requirements for greenhouse gas emissions.

This research was supported in part by Agriculture and Food Research Initiative Competitive Grant from the U.S.

To put these in perspective, nitrous oxide and methane have global warming potentials of 310 times and 21 times that of carbon dioxide, respectively, Dr. Casey said. This means these gases trap more heat within the atmosphere than carbon dioxide per unit weight.

“These greenhouse gases contribute more toward climate change but are not concerns for human or animal health at the concentrations that exist in and around feedyards,” he said. “But they need to be studied because we need to know how much is being emitted before we can accurately determine what contribution feedyards are making to the national and global inventory of greenhouse gases.”

Dr. Casey said determining these numbers now also will help make sure any future regulations that might be imposed are based on scientific findings.

“But little research has been conducted into the emissions of these greenhouse gases from beef cattle feedyards and particularly as it applies for the climatic conditions, ration formulations and management practices of Texas High Plains feedlots,” he said.

His AgriLife Research study was set up to determine the range of nitrous oxide and methane emission rates from feedlot pen surfaces; to obtain an understanding of seasonal, temporal and spatial variability of emission rates within pens; and to gain insight into the factors that influence and control emission rates, such as moisture content, days since rainfall and nitrogen content.

In his study, the emissions from the pen surfaces were measured on 20 sampling days from June to October 2011, Dr. Casey said. The air samples were collected from the chambers’ headspace at 0, 10, 20 and 30 minutes using syringes, transferred to evacuated vials and analyzed with a gas chromatograph.

From the nitrous oxide and methane concentrations, emission fluxes were calculated, he said.

Dr. Casey said the study showed nitrous oxide and methane flux generally increased with increasing manure pack temperature. Following a rain, nitrous oxide flux would spike and then was followed by a decline to pre-event levels over three to six days.

The nitrous oxide flux increase due to a rain was approximately 100 times greater than the temperature response, he said.

Knowing the production and release mechanisms that influence these emissions will help the industry to develop management systems that could reduce the emissions, he said.

Accurate and well-designed emission measurements from well-characterized types of manure and manure management systems will be needed to reduce the uncertainties, he said. These measurements must account for temperature, moisture conditions, aeration, manure nitrogen content, metabolizable carbon and duration of storage.