Panel of poultry litter providers and applicators share their views on the business and how they manage regulations and their operations. 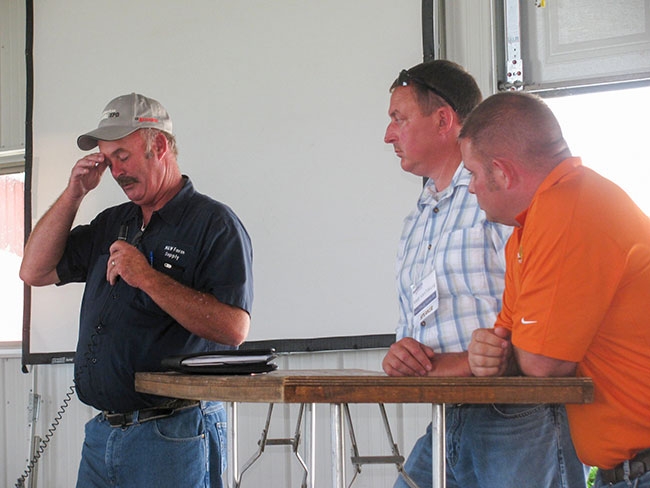 People in the poultry industry have been on the fast-track to learning how to better deal with manure in the face of changing application rules and environmental concerns.

Three leaders of Ohio’s manure spreading industry got together with poultry producers to offer background information on some of the regulations they deal with and offered their own business perspectives.

Matt VanTilburg
“Back in 1999, there were a lot of issues with water quality,” said VanTilburg, who’s from Celina, Ohio. “We were also running out of land.”

The amount of manure poultry farmers had available, outstripped the amount of land for applying. VanTilburg’s farm already offered retail products such as fertilizer, as well as services such as soil testing, so adding poultry litter to their list of commodities seemed a natural way to enrich the soil while improving water quality.

“We started spreading it (poultry manure) on our farm and we liked what we saw,” he said. “So did our fertilizer customers. It was just a natural fit that we began selling poultry litter.

“For the first couple of years, we learned real quick that not all spreaders are equipped to handle the quantities. If you have a couple hundred tons, it’s one thing. But, if you have tens of thousands of tons, it takes a different system and a bit of management to make it work.”

There are also new rules and regulations governing the spreading of litter, he said.

“They are more stringent, and cover what you apply, how, and where you apply it.”

In his area, farmers must be aware of both Indiana and Ohio State rules regarding manure spreading, plus the Grand Lake Watershed and the Western-basin Lake Erie Watershed.

“If I’m asked if I’m spreading manure that day, I have to think of where I’m located. It literally comes down to what side of the road am I on. It is quite a job to keep track of all the rules and regulations,” VanTilburg said.

As a soil amendment, poultry litter is a good source of phosphate, potassium and micronutrients compared to dry fertilizer.

“A lot of people don’t realize that commercial fertilizer is more water soluble than poultry litter and will end up in the water quicker,” he said.

VanTilburg recommends three tons per acre applied every other year. At this rate, you will build up phosphate and maintain potassium. There should be enough nutrients in the soil to last a corn and soybean crop about three years, he said.

On VanTilburg’s farm, poultry litter is stockpiled in the summer for spreading in the fall. They also use that time to clean out the barn and reduce the risk of disease while it is dry.

“That’s the key to the process, getting the manure there before the beans are cut because you don’t have enough trucks after harvest,” he said.

“Everything has to be soil tested. I like to see a spring soil test before corn or beans are planted, then you know where you can put the manure or not put the manure and away you go.”

Tim Wood
“I’ve spent my entire career, since the age of 17, in the fertilizer business and chicken manure is the natural version of fertilizer that every farmer needs. Typically, if we get into trouble with homeowners, we tell them it’s organic fertilizer and that makes them happy and the smell only lasts a day or two,” said Tim Wood, manager of M&W Farm Supply.

“We began chicken manure operations in 2013 with Ohio’s largest producer with about 13 million chickens in 85 barns, some of which are battery and some are still high house,” he recalled.

A separate crew brings the manure out of the high-house barns on trailers. They are 650-feet long and there’s only one way in and one way out, so removing the manure is a slow process. At their main facility, they built a large shed measuring 120 by 448-feet with a 67-foot peak that holds around 50,000 tons of manure. They spend summer and winter filling it, and use three pull-type spreaders to empty it.

“The problem with the high-rise houses is that the manure is extremely dry,” he said. “We’re talking 10 to 11 percent moisture. It’s a dust pile. So, in the winter time, we bring in manure from the compost barns in the south and we blend those two together to make a product that doesn’t drive the neighborhood crazy.”

Wood said they have one person who does all their soil tests.

“Then we put our heads together to make recommendations. If you tell me what your budget is for manure, then we’ll figure out where to best put those tons. It’s not that it’s going to cost you more or less than the two ton rate, it’s that we have to go to work and put that manure where it best suits the field,” he said.

“We like to believe that 40 percent of the organic nitrogen will come loose in the first crop, and quite a bit more in the second. Beans have done amazing things with the organic nitrogen. A 70-bushel bean crop takes 500 pounds of N, which is two and a half times more than a corn crop. It responds well. We really like what we see coming out of the chicken coops.”

If you want to truly see the value of chicken manure, put it on a crop of alfalfa, said Wood.

“We had so many calls this year from farmers saying: ‘You didn’t tell me I was going to be baling hay all summer,’ because it really causes alfalfa to go nuts, and recovery time is better.”

Wood’s operation has 50,000 tons stored away and there’s a waiting list for the product.

“We get enquiries every day, even on Christmas Day,” he said. “The farm we’re working with, they are in the process of expanding their operation by a third into the 200,000 ton range, which is 100,000 acres basically.”

The litter is sold by the ton. Wood’s spreaders are equipped with scales plus the barn also has electronic scales.

“[We] cross check those two weights all the time,” he said.

Wood also charges for trucking the manure, about $13 to $14 per load on top of the cost of the manure.

“That rate is basically the same, regardless if the source is pullet or layer manure,” he said. “The nitrogen level and organic matter are higher in pullet manure, while the calcium level in layer manure is generally 175 to 250 pounds of calcium per ton versus 165 in pullet. Nutrient-wise, they are very similar. There isn’t a lot of difference.”

“The biggest difference between our companies is the type of facilities our manure originates from are very different,” he said. “Two-thirds of the manure we spread comes from one large operation, and the other third from several smaller operations.

“Dealing with smaller farms, and guys with only 10 to 20 truck loads coming out of their barns, you really have to work with those guys to make sure they keep the quality of the manure up if they want to sell a quality manure product. So, when you ask if there are different prices for the ton, a lot of it is based on the quality, if there’s an abundance of moisture in it, the farmer is paying for more water and less nutrients and it doesn’t have the value of drier manure.”

Bambauer uses two Meyer spreader boxes that he considers to be very efficient spreaders, capable of spreading any type of litter, wet or dry.

“We compared machines and chose the spreaders that could spread a variety of manures, and we modified them to get the best spread pattern.,” he said. “The horizontal beaters break up the manure and it is thrown by spinners. If you can get the manure flowing through there correctly, you can get a really good pattern going.”

Bambauer charges by the ton, taking into consideration the distance from the source of manure.

“If the customer wants to put on low rates, the price will be higher to justify your equipment, and time spreading.  On the other hand, if there are higher rates needed, you can be more efficient while in the field and can justify a lower price. You have to consider the rates of application and the logistics needed to get the manure to the field, and the application timing.”

He makes sure everything has electronic scales on it so he can calibrate each load of manure.

“If the applicator calibrates the first load correctly, he can pretty much dial it accurately from the very first load of manure,” he said. “Experience gives the operator a great starting point as manure quality does vary, but the scales make sure it’s as exact as possible. Much of the manure we apply is done with varying rates according to soil samples, so that initial calibration is key.”

Before applications happen, Bambauer wants to see soil tests and have a plan put in place to correctly apply the manure in the best areas to ensure crop performance and water quality. Ideally, soil samples are pulled in fall cornstalks to develop a plan for the following fall in the soybean stubble going to corn.

“Spring would be the ideal time for soil tests but it’s such a chaotic time of year for us, and planning ahead allows the farmer to budget, create the best plan, and stockpile so it can be applied and incorporated in a timely fashion the following fall,” he said.

“We encourage guys to work [the litter] in. We also use efficiency products such as More Than Manure from Verdesian Life Sciences to preserve nitrogen and protect phosphorus. They actually work really well and we encourage our customers to use the same products because it protects from loss, ensures water quality, and also diminishes the ammonia and smell from the manure application.”