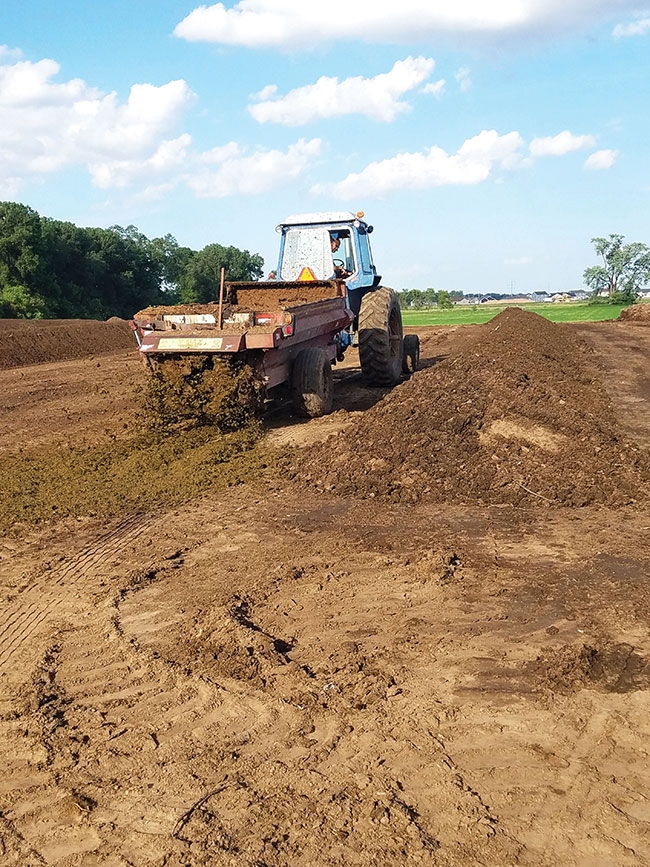 Urban encroachment on traditional farmland is becoming a big problem. Farmers contend they should be allowed to conduct business as usual because they were first in the neighborhood while nearby homeowners complain that farm odors are wafting into their family barbecues and must stop.

In worst case scenarios, it has even escalated into litigation between farmers and their neighbors.

But the Petersen Dairy Farm near Appleton, Wisc. – with a population of 74,000 – has discovered that an investment in composting to both manage their manure and significantly reduce odors is really paying off in maintaining good relations. It doesn’t hurt that they’ve also adopted an open door policy by way of using their dairy farm as an educational experience for school kids and have become an outlet for old newspapers from the community,

Manure composting is a long-standing practice at Petersen Dairy Farm. The dairy, which is owned by Pete Petersen and his sons, Mark and Steve, began composting 22 years ago, producing more than 33,000 tons of compost since the beginning. Mark is the dairy herdsman and Steve is a machinist.

With a high school, businesses and subdivisions literally steps away, Mark says the dairy understood that it needed to find an alternative to managing its manure beyond the standard practice of land applying raw manure on farmland as both fertilizer and as a disposal method. Athletic fields at the school are less than a quarter mile from the barnlot and pasture. He estimates that each cow generates about 27 tons of manure per year or a total of about 3,000 tons on the dairy farm, so it could have developed into a big problem. Composting offered the best alternative to land application.

“We’ve never had one complaint about our manure since we have been composting so it seems to be a good solution,” Mark says. “And most of our urban neighbors are our compost customers. So, we have created a relationship with our neighbors by way of our compost, which is kind of a unique thing.”

The farm is located about 20 minutes from Green Bay and uses shredded newspapers exclusively for their cow bedding, which not only works as a great alternative use for the newspapers and a comfortable environment for the herd, but also provides a good carbon source for the Petersen’s composting process. The dairy consumes about 1,500 lbs of shredded newspapers per week.

The more than 1,500 tons of compost produced by the dairy annually creates a great organic amendment for local gardens and houseplants. The farm sells out every year. Composting the manure also prevents potential runoff from the raw manure – phosphorus in particular – from entering local watercourses. Runoff from the farm’s new compost pad is carefully controlled with vegetation – like grass and clover – planted around the pad as a water filtration system. Situated well back from the highway and homes, row crops and alfalfa are also planted around the compost pad as an extra measure of runoff control and filtration.

The compost is sold in small volumes with customers providing their own containers. A five-gallon pail of compost sells for about $2. They sell quite a lot of the material by the pickup truckload and have a couple of their own trucks available for deliveries. Mark says they make some money from selling compost and it pays back big time in not having the expense of land applying smelly raw manure. It costs about $100 per cow to land apply the raw manure. There are savings by switching to compost, but the processing cost should be factored into that calculation. One positive part of that calculation relates to material handling, as there is significant shrinkage in volume from manure-laden bedding to compost. Mark estimates that six loads of fresh manure converts to about three loads of compost.

The raw manure has a fertilizer value of about $127 per cow per year, but Mark says they are making a lot more money selling it as compost.

“It is worth much more as compost retailed off the farm than it would be as fertilizer applied to the fields,” Mark says.

Selling compost also creates a new income stream for the dairy in a situation where there is little opportunity to expand since they are so close to town. Mark calls the operation an urban farm.

A Meyers V-type manure spreader is used to daily transport the dairy barn’s raw manure to the composting site.

Finally, there is the intangible value of having happy neighbors.

Mark credits Kevin Erb, director of the Conservation Professional Training program at the University of Wisconsin Extension, for helping them understand and learn the value of composting as well as organizing tours to other farms where manure is composted. Erb connected with the farm when Mark served on a local watershed advisory committee.

Erb says Petersen’s manure management concerns were not only related to maintaining good relations with neighbors and minimizing manure runoff into local watersheds, but it was also a safety issue on the farm.

“The county highway literally changes from four lanes to two at the end of the farm driveway and dealing with the traffic was a concern,” he says. “There were several near misses when they were daily hauling manure, so they were concerned about traffic safety when the manure storage would need to be emptied. Mark was looking for a solution that would decrease their use of the busy road and not create an odor issue.”

Erb says that he was totally honest with the Petersen’s during their initial meetings about the work involved in taking the composting route.

“Often, farmers hear about composting and don’t understand the work involved or how it should be managed,” he says. “So, I sat down with the Petersens and made sure they fully understood what composting was and the keys to make it successful.”

Mark says they began on a small scale with Erb as mentor, learning about the monitoring and turning process required to produce a quality compost product.

“We were really surprised with how pretty a product we could come up with,” Mark says. “We started by contacting neighbors and friends to kind of test market it. We found that it disappeared faster than we could produce it, so we were very encouraged by that.”

As dairy farms go, the Petersen Dairy is quite small, operating on a 65-acre farm with about 115 milking cows and heifers. They produce up to 32,000 lbs of milk annually. They rent another 335 acres where they plant soybeans, corn and alfalfa. The farm has been at its current location since 1904. Over time, the town of Appleton has been creeping closer and closer, and has even impacted their composting operations to the point where their pad needed to be relocated.

A four-acre piece of the farm that included a portion of their composting pad was recently lost to construction of a roundabout and a stormwater pond. But the Petersen’s were able to negotiate some engineering assistance to improve drainage and some clay fill recovered from construction of the stormwater pond for use on their new composting site as part of the land deal, which again resulted in a positive for both the farm and the community. They also received a permit from the state’s Department of Natural Resources to ensure that the compost pad was engineered and built to 2017 standards. The permit also allows them to expand their operations by accepting manure from other farms, if they decided to take that route in future.

The gutters in the dairy barn are cleaned daily with an older style barn cleaner. The manure-laden bedding material is augured into a Meyers V-type manure spreader and delivered to the composting pad. By the time the dairy is ready to start composting in spring – once the compost has thawed out – they have created about a 200-foot-long windrow. They continue to compost until the windrow begins to freeze up. The process of composting involves turning the compost pile three times a week and monitoring the internal temperature and moisture to ensure there is a healthy environment for bacteria to work their magic to convert the manure into compost. The compost piles heat up to as much as 150 Fahrenheit, which has the effect of killing most pathogens and weed seeds. The carbon within the shredded newspapers helps to achieve the right carbon to nitrogen ratio. Mark says they take their time with the composting process to ensure that the conversion cycle is complete. He estimates that it takes about a year for the raw material retrieved from the barn to be ready for sale as compost. Over the years, they have developed the expertise and knowledge to ensure that the compost heap maintains a steady temperature and moisture content, for example adding items like soybean straw and corn stocks, as needed, to improve airflow and reduce moisture content. This also helps to heat up the windrows more quickly.

The turning process is labor-intensive. They started with a bucket loader but have graduated to renting and then purchasing a purpose-built Wildcat 750, a two-pass compost turner, which they pull behind an older International Hydro 100 tractor. Mark says this particular type of turner needs a tractor with a hydrostatic transmission. The compost turning is handled by his brother, Steve. As another bonus to the community, they have hired a couple of local youths to look after the sales part of the operation and customer service while the Petersen’s focus on dairy operations.

Erb says to succeed at composting, it is important to have an on-farm composting champion who is motivated to manage and monitor the operation.

“Whether that is a teenager with a significant interest, a semi-retired family member, or a neighboring retired farmer, the compost windrows need to be watched and turned at the right time to prevent odors and problems,” Erb says. “Having one person who has the time and the interest to take charge is often the difference between success and failure.”