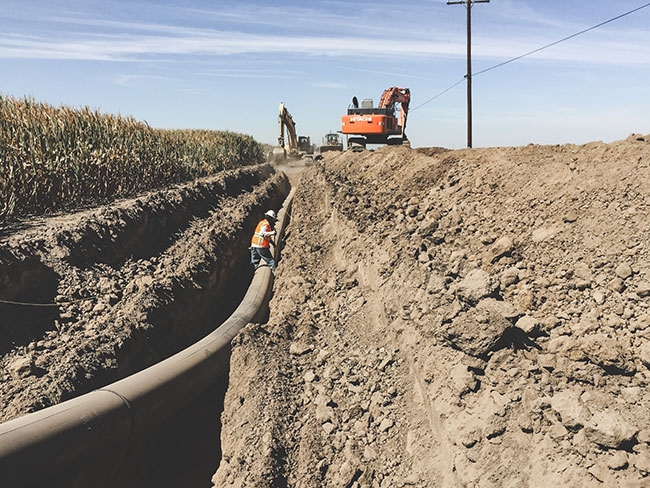 The main trunk pipeline of the system is already installed, and by the time all the farms are connected, more than 30 miles of biogas pipeline will be in place. Contributed photo

Calgren Dairy Fuels is becoming known as a world leader in biogas production and utilization, with good reason. Of the 18 dairy digester projects that were recently awarded more than $35 million in funding by the California Department of Food and Agriculture, seven of them involve Calgren.
These projects fall under the state’s Dairy Digester Research and Development Program, which aims to reduce greenhouse gas emissions from manure generated at state dairy farms.

Each Calgren project (including five others for which Calgren is also seeking funding) all involve covered lagoon digesters being built at 12 dairy farms in Tulare County, as well as pipelines being installed to take the biogas from each digester to Calgren’s ethanol refinery in Pixley. It’s all located within California’s San Joaquin Valley, where air pollution has been labelled some of the United States’s worst by the California Energy Commission.

“California dairies are under pressure to minimize the release of methane from manure,” notes Lyle Schlyer, president of Calgren Renewable Fuels, parent company to Calgren Dairy Fuels. “This project, called the Calgren Dairy Fuels Cluster, will help address that issue.”

When asked about how this ambitious pipeline project came to be, Schlyer says “it was a natural follow up” to the successful (and ground-breaking) digester that Calgren built at its refinery in 2014 (see sidebar). He adds that the local dairies “have been deluged with offers from digester developers and that we sincerely appreciate their willingness to sign on with us.”

Calgren plans to have the first wave of the twelve lagoon cover digesters built and connected via pipeline by mid-2018, with the remainder online by the middle of next year. The digesters will be built by Maas Energy Works. These types of digesters take advantage of the high ambient temperature of California’s Central Valley, notes Mass Energy Works CEO Daryl Maas. Gas production is highest in the summer, but still remains steady in the winter.

Each lagoon will be covered with high-density polyethylene fabric anchored in the ground around the perimeter of the lagoon to create a very tight seal.

“The ponds are always full, so when one gallon of manure enters the inlet, it displaces another gallon at the outlet,” Maas explains. “The ponds are designed with greater than 30 days retention time to give the bacteria time to maximize biogas production.”

The main trunk pipeline of the system is already installed, and by the time all the farms are connected, more than 30 miles of biogas pipeline will be in place. The pipe diameter varies from four to 20 inches, and the pipe material is SDR21 HPDE, suitable for low-pressure biogas transport because of its durability and ease of installation. The depth varies, with some pipe as shallow as four feet and other sections as deep as 11 feet. Schlyer says most of the installation challenges – such as roadway easements, encroachment permits and irrigation ditch crossings – have already been addressed. However, he adds that as with any excavation project, temporary storage of dirt is always a challenge because the pipeline route runs close by both public roadways and farm fields.

The biogas will be pre-treated at each farm before it enters the pipeline to remove material such as water, and will be given another cleaning upon arrival at the refinery. At that point, some of it will be used to fuel two 5-MW gas co-gen units, which produce both electricity and steam. Another portion will be injected into the local gas pipeline and transported to refueling facilities owned by gas company CNG. Lastly, some of the biogas (as well as biogas from the onsite digester) will also be used to produce both electricity and heat for a new biodiesel plant that will come online mid-year. In all, biogas will make up about 80 percent of total fuel used at the refinery, providing tens of thousands of dollars in savings on the facility’s natural gas bill every month.

All the dairy farms will all receive guaranteed payments for their digester biogas for 20 years. For Calgren’s part, Schlyer prefers not to discuss when cost return is expected to be reached (when the cost of the pipelines will be paid for by natural gas savings at the refinery), but says he and his colleagues “are pleased with the projected financial return on the project.”

The Pixley Biogas Project
The Pixley Biogas Project began operation in October 2015. It is the first anaerobic biodigester in the U.S. to power another renewable energy facility (Calgren Renewable Fuels’ ethanol plant). It cost Calgren $10 million to build, with $4.6 million of that granted from the California Energy Commission’s surcharge on vehicle registration fees (a fund that produces about $100 million year for California to support the use of low-carbon fuels such as ethanol).

The manure for the Pixley digestor comes from nearby Four J Farm Dairy, where 2,000 dairy cows produce 55,000 gallons of solid and liquid manure daily. The manure travels from the farm through about a mile of eight-inch diameter PVC pipe to the Pixley digester, a manner of manure transport that many consider more environmentally-friendly and more convenient than trucking. Added to the Pixley digester every day is 10,000 gallons of food waste, trucked in from local food processors, renderers and companies that pump grease-traps for restaurants, food processors and other food service outlets. It was the first digester project in California to use the state’s streamlined permitting process for co-digestion of manure and other materials.

Since 2008, Calgren’s ethanol plant has been producing about 58 million gallons of ethanol each year from corn and sorghum. The company also sells CO2 gas it collects from the ethanol production process to a firm that compresses the gas on site and then transports it by truck and by rail to customers for soda pop and other commercial uses.

Summary of funded Calgren Dairy Fuels Cluster pipeline and digester projects
These projects are located in Pixley and Tulare County. Calgren has received the following funding: