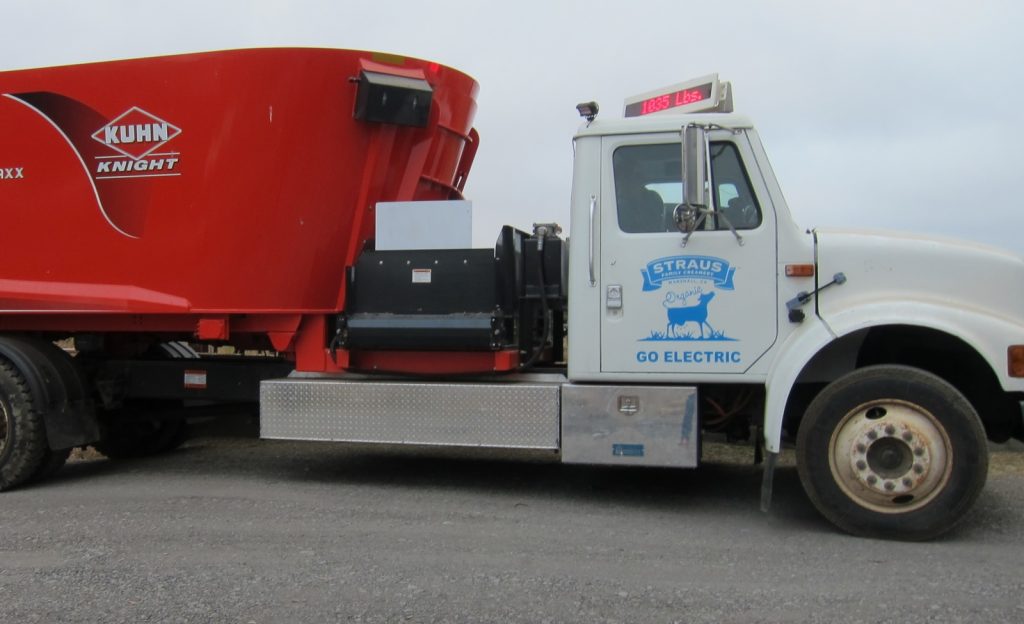 This new full-scale-electric feed truck is the next step in Straus’ quest to show that his Marin county organic dairy farm can be carbon positive, using agriculture as a solution to reversing climate change.

Straus, along with a local mechanic, spent eight years developing the 33,000 lb. gross weight truck to use as a feed truck on his farm. The truck measures, mixes and hauls feed before dropping it into the trough for his nearly 300 organic dairy cows.

An environmentally-friendly alternative to diesel-fueled trucks, the feed truck’s motor is charged from electrical power generated from methane gas produced by the cows’ own manure.

California dairy farmers are facing pressure to lower methane emissions under the state’s ambitious new greenhouse gas reduction laws, which include methane emission reduction targets of 40 percent below 2013 levels by 2030.

The state’s Air Resources Board says that much of the reduction should come from converting methane from cow manure into energy. Dairy manure accounts for about a quarter of the state’s methane emissions.

“What I’ve tried to do is create a sustainable organic farming model that is good for the earth, the soil, the animals, and the people working on these farms, and helps revitalize rural communities,” said Albert Straus, CEO and founder of Straus Family Creamery.

Straus added, “My electric feed truck is not only a practical tool for my organic farm. It is also a symbol of the resourcefulness we need to fight climate change, which threatens our business and the future of American farming.”

Straus’ methane digester has been powering his farm since 2004, fueling his all-electric Toyota RAV4 and Nissan Leaf plus smaller farm vehicles and machinery. Working with the Marin Carbon Project, his 500-acre farm is California’s first dairy to develop a 20-year carbon farming plan to sequester 2,000 metric tons of carbon every year.

Straus’ goal is to demonstrate to the farming community and public that farmers can implement and teach others practical solutions to climate change. Ultimately, Straus is working towards getting his farm off fossil fuels entirely.

United States plug-in electrical vehicle sales have increased nine-fold since 2011, per Inside EVs. Yet Straus believes he is the first to put a full-scale electric feed truck into use, getting the jump on Tesla Motor’s electric semi-truck slated for September 2017 release.