How using a high-powered compost/litter spreader can help farmers and custom applicators maximize their productivity — and their profits.

As farming expenses rise, there’s more pressure on producers to get the most out their equipment investments.

They’re also expected to do more with less, and a good example of that is how the windows for manure, compost and litter applications are continuing to shrink.

“In some places, all the composting material has to be applied before the farmer gets out to the fields because of government regulations, which really reduces the application window,” he says.

It’s important more than ever for farmers and custom applicators to choose a high-performance compost/litter spreader that maximizes productivity and profitability.

If a spreader has limited horsepower and hydraulic capabilities, the spinner that distributes the compost or litter won’t be able to maintain its speed if there’s too much material flow.

That can lead to poor spread patterns and streaking fields, and to avoid that, the spreader operator has to slow down and reduce the machine’s swath width, which in turn, will dramatically limit productivity.

Spreaders with higher horsepower and hydraulic flow capabilities can apply compost and litter faster, wider, and at higher rates, all while maintaining consistent spread patterns. By increasing their spreadable acres per day, farmers and custom applicators can save time and, by reducing their expenses for fuel and labor, achieve a better cost per acre as well.

Rathjen maintains New Leader’s line of high-horsepower compost/litter applicators are a good fit for those looking to boost their bottom line. 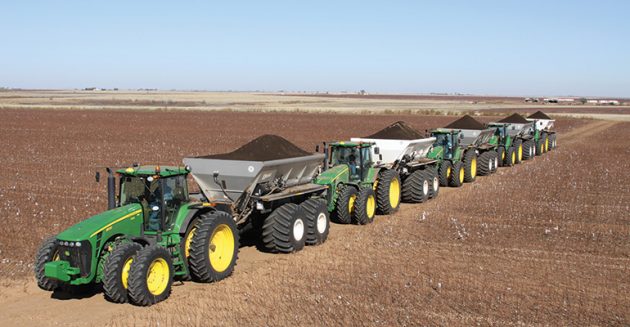 “That’s what farmers and custom applicators want — to be able to get more done in a day, which increases their return on their investment and their profits,” he says.

New Leader spreaders include the NL5034, a high-output, high-capacity truck-mounted applicator that’s capable of spreading up to three tons of chicken litter, 60 feet wide, at 12 mph, and the NL600, a pull-type version of the NL5034 introduced in January.

Thomas Brittle sells New Leader compost/litter applicators at Southeast Ag Equipment in Wilson, NC, where he is general manager and head of sales.

He describes New Leader’s compost/litter applicators as superior machines that, thanks to their innovative design, can do the work of up to two or three other spreaders.

“Because of the increased capacity, you can spend more time in the field spreading and [cover more acres] per day,” he says.