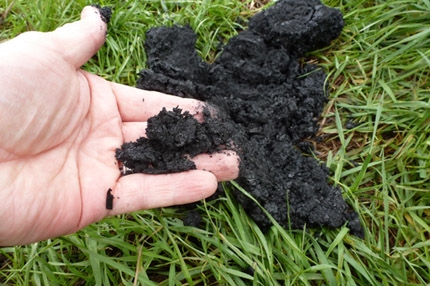 Over 12 weeks, each biocover was evaluated for its effectiveness at reducing odor. The biochar could have a future use as a nutrient-rich soil amendment. Brian Dougherty

August 10, 2017 – Manure is a reality in raising farm animals. Manure can be a useful fertilizer, returning valued nitrogen, phosphorus, and potassium to the soil for plant growth. But manure has problems. Odor offensiveness, gas emissions, nutrient runoff, and possible water pollution are just a few.

Timing is also a problem. Livestock produce manure 24/7 – even when it is impractical or unwise to move it to the field. Delivering manure to the field needs to be timed to nutrient needs, soil moisture levels, and temperature. How can farmers handle this timing issue, as well as other manure problems?

In cities, sewers and water treatment facilities deal with human waste. On farms, manure storage lagoons can hold the manure until the time is ripe. This solves the timing and delivery problem – but what about odor and gas emissions?

In addition to the inconvenience of odor, manure can release gases connected to air pollution and climate change. Methane, nitrous oxide, ammonia, and hydrogen sulfide are examples. Scientist Brian Dougherty and colleagues researched methods to reduce these negatives while potentially adding some positives: biochar covers.

Biochar is plant matter, such as straw, woody debris, or corn stalks, that has been heated to high temperatures in a low- to no-oxygen environment. The result is a black, carbon-rich material similar to charcoal.

“Biochar provides a structure with lots of empty pore space,” he says. “The outer surface may appear small but the interior surface area is absolutely massive. A few ounces of biochar can have an internal surface area the size of a football field. There is a lot of potential there for holding on to water and nutrients.”

In addition to its hidden storage capacity, the surface of the biochar tends to have a chemical charge. This gives biochar the ability to attract and hold nitrogen, phosphorus, and potassium ions, metals, and other compounds. Biochar can also float (some types more than others). That attribute means it can trap gases at the water’s surface.

Growing up on a dairy farm, Dougherty is no stranger to the challenges of manure storage.

“Once I realized the properties of biochar, I thought it had good potential for a lagoon cover,” he says.

The research found that the biochars picked up the most nutrients from the more concentrated manure with a higher nutrient content.

“The biochar will take up whatever it can, so if there are more nutrients available the potential for nutrient uptake is greater,” Dougherty says.

Nitrogen, phosphorus, and potassium are nutrients with the greatest economic value on a farm, but applying them in excess of what the crop can take up can lead to nutrient loss to the watershed.

Dougherty also measured the ammonia at the top of each pail. Ammonia and sulfates are the main source of manure’s odor. The cooler-crafted biochar did best here, reducing ammonia by 72 to 80 percent. It also floated better. But because it floated better and tended to repel water, it was less effective at attracting and attaching to the nutrients than the warmer-crafted biochar.

Biochar is currently more expensive to buy than straw, but Dougherty is undaunted. Biochar could have a good economic return: excess farm and forestry residue could be used to create the biochar on site. This process generates energy that could be used heat water and warm buildings during colder months. There is also potential for generating electricity, fuels, and other by-products using more sophisticated equipment. After its use in the lagoon, the biochar could be spread on fields as needed. Any excess could be sold as a high-value fertilizer product.

And biochar has great environmental benefits.

“Anything you can do to prevent gases from escaping the lagoon is a good thing,” Dougherty says. “Biochar applied to soils – particularly poorer quality soils – is very helpful. Making biochar can also help reduce atmospheric carbon dioxide levels. A portion of the carbon dioxide that was taken in during plant growth ends up as a very stable form of carbon in the soil. The overall picture has multiple benefits.”

Dougherty’s research did not avoid the obvious. Would biochar or straw best improve the dairy air? Since the human nose knows, Dougherty recruited a panel of judges. The weather intervened, however, with freezing temperatures and rain affecting the odor intensity over the 12-week trial. Despite these challenges, three different biochars were shown to reduce odor from liquid dairy manure, whereas a straw cover was not effective.

“Determining the best trade-off of biochar properties will be an important next step,” Dougherty says. “More research could find the right biochar production temperature, particle size, pH, and float properties. The potential is there.”

This portion of the research still needs to be sniffed out.