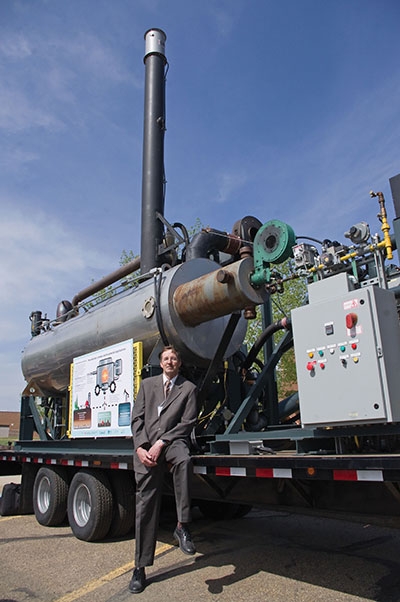 Mel Mathison, Dean of Environmental Sciences & Applied Research at Lakeland College in Vermilion, Alta., is dwarfed by one of two pyrolysis units that will be used to test various feedstocks, including manure, for the production of biochar.

Alberta is well known for two industries – cattle and oil. The primary byproduct of the cattle industry, specifically manure, may soon help the oil industry deal with the safe disposal of its own byproducts through a new initiative aimed at developing the province’s biochar production capacity.

Manure will be tested as a potential feedstock to produce biochar along with other farm waste materials like wheat and flax stalks.

“Using charcoal as a soil amendment is not something new in certain parts of the world,” says Julie Major, an agronomist and lecturer at McGill University in Montreal, and an expert in the historical use of biochar. However, she adds that it is not commonly used in North America because the region’s soils are already quite fertile. Where biochar really shines is in its ability to increase the fertility of less productive soils.

It is also showing potential as a stabilizing agent for oil industry waste fluids.

Dr. David Mitlin and his team at the University of Alberta are trying to develop a prototype of inexpensive biochar-based carbon that effectively removes naphthenic acids and total organic carbon from steam-assisted gravity drilling (SAGD) and oil tailing’s water.

Scientists are not quite sure why biochar works the way it does, but Alberta has decided to spend considerable time and effort to find out why, given the potential it has demonstrated so far. The Alberta Biochar Initiative kicked off recently at the Alberta Innovates – Technology Futures (AITF) site in Vegreville with the unveiling of two pyrolysis units, which are the devices that convert agricultural wastes like manure into biochar at very high temperatures in a very low oxygen environment.

In terms of feedstock to produce biochar, the initial research focus will be to investigate the conversion of biological waste material to biochar where high volumes of waste already exist. These could be stocks left over from artichoke production, wood waste from a sawmill, sludge from a pulp or paper mill or feedlot manure.

“We think we can use it (manure) as a feedstock, but we haven’t tested it in these machines yet,” says Mel Mathison, Dean of Environmental Sciences & Applied Research at Lakeland College in Vermilion. “The moisture content and just getting it to feed through would be two of the things that would have to be worked around. You might have to do some drying ahead of time and make some modifications to the feed systems, but yes, it certainly is one of the feedstocks we’d want to look at.”

With a $900,000 grant from the federal government through Western Economic Diversification Canada, Alberta Biochar Initiative partners were able to purchase the pyrolysis units. They will use them in their research program and as demonstration units with businesses and individuals interested in evaluating the economical potential of producing biochar on a commercial scale. The units convert feedstocks to biochar at temperatures in the 500 to 700 C range, and while researchers are still in the process of commissioning the units to determine their production capabilities, users can expect production of probably a couple of tonnes of biochar per day.

AITF is working in partnership with Lakeland College on the Alberta Biochar Initiative. By coordinating research while promoting commercialization, the goal is to potentially have a commercial biochar industry established in Alberta within about four years, versus a decade or more if researchers and entrepreneurs continue to work independently.

Mathison says he believes there is considerable market potential for biochar.

“I think there is a lot of potential for this product in the horticultural industry, the greenhouse industry and in areas where there are high value crops to enhance the soil growth medium that they are currently using,” he says. Another potential use worthy of more research is in the area of water treatment.

Down the road, once initiative researchers have a better handle on the costs associated with biochar production and the mobility of the pyrolysis units, Mathison says it may be worthwhile to study the economic viability of smaller scale biochar production, such as conversion of manure as well as straw and hay bales from individual farms.

In terms of the conversion rate of the raw material to biochar, Don Harfield, team leader for Thermochemical Processing Bioresource Technologies at AITF, says that a tonne of feedstock will realistically produce between 15 to 28 percent biochar. Actual production depends on the size of the particle being fed into the pyrolysis unit, its moisture content, and the type of material.