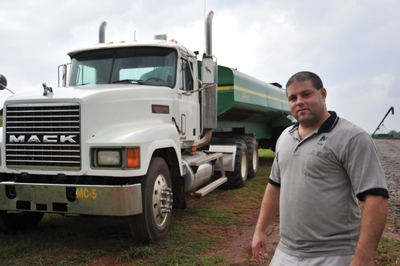 Phillip McLain has been working to stay on top of advances in high-speed radial flotation tire technology. “If we can get more speed in the future, that’s my ticket to expansion,” he says. “I can haul more gallons, and I can knock those tractors out of the way.” Photo by Steve Werblow

Phillip McLain is a man on the move.

When he’s not dispatching his five full-time drivers on manure hauls around Statesville, N.C., he’s checking in on his family’s 5,000-acre farm or its oilseed crushing mill, or exploring the latest farm software technology to integrate into his precision agriculture consulting business. Crackling with entrepreneurial energy, it’s no surprise that McLain has zeroed in on making his manure hauling equipment as fast and efficient as possible.

McLain has converted six Mack trucks to high-efficiency manure hauling rigs that provide him and his team of drivers with versatility, speed and economy.

McLain buys used over-the-road haulers and replaces the duals on their rear axles with 700/40-22.5 flotation tires. He makes sure they’re outfitted with 40,000-pound rear ends for stability, and geared at 4.10:1 or 4.17:1 ratios for reliable pulling power. He keeps standard 22.5-inch truck tires on the front axles to aid in steering and resist the push from the heavy, 8,000-gallon Diller Equipment tanks his team is pulling.

Perry Reid, McLain’s top driver, says the tractor-trailer setup is more stable on the road than trying to haul a tank with a farm tractor.

Cost-efficient
One of the immediate appeals of McLain’s system is cost – he figures he can put a rig on the road for about one-third the cost of a new tractor.

McLain points out that the efficiency of his system goes well beyond cost efficiency.

“Efficiency means lots of things,” he says. “It means cost. It means speed.  It means agility in the field. On the road, we’re going 20 to 30 miles per hour loaded, and empty, we’re probably going 10 miles per hour faster than that. At that speed, I can do three loads with a truck versus one load with a tractor.”

Part of the edge comes from equipment, but logistics plays a key role, too. “Our technique and logistics are two things that we have pioneered over the years to protect our customers’ fields and our reputation,” McLain says. “We combine those two things with our equipment setup, and it’s been the hallmark of our success.”

The result is that McLain can be extremely cost-effective on the typical three-to-five-mile haul, and can out-compete other applicators on hauls as far as 10 miles from the lagoon. His team can also run on steep or wet ground that can keep most tractors stuck in the turnrow.

“We can do things on these tires that you couldn’t do on a regular truck, and when you’ve got wet grass, we can go where nothing else can go,” says Reid. He says one customer marveled at Reid’s ability to spread manure with his truck on a hillside that no tractor had been able to conquer.

Tire technology
McLain uses Alliance flotation tires on his drive axles, a brand he first encountered on his tanks. Comparing them to other flotation tires, he quickly realized that not all flotation tires are created equal – where the other tires wore bald in a single season, McLain had plenty of tread left on the Alliance tires after two years and 20 million gallons per rig.

The deep tractor lugs on his 331 drive tires provide excellent traction and side-hill stability without excessive soil compaction, he says, while the blockier 390 tread pattern on his tanks – sized at a beefy 710/50R 30.5 to spread the tanks’ heavy load over a very wide footprint – is geared toward protecting grass and other crops.

Like any tool, tires require attention and care. Maintaining the appropriate air pressure for load and speed is vital for safety and performance, McLain notes. So is constant attention to his tires, a job he and his drivers share with Clark Tire of Hickory, N.C.

Good neighbors
Reid adds that tread design and rubber compound also reduce road noise – no small benefit when it comes to staying friendly with the neighbors. In fact, when he first drove a rig outfitted with the 331s, he stopped and got out to see if something was wrong because the truck was running so quietly.

“I live right in the middle of three dairies we haul from, and I would listen to those old tires at night,” Reid says. “I could see why neighbors might not like us. Now it’s a lot quieter. That’s important, especially when we’re running at night.”

McLain and his crew have built a reputation for looking out for neighbors and customers. In 2009, when relentless heavy rains kept even his trucks out of local fields, many ponds were close to overflowing, and there was no break in sight. Reid and fellow driver Greg Johnson rigged up a 40-gpm pump at the outlet of one of their tanks, ran it to a 1/5-inch pipe, and created a mobile big gun system. From the road, they could shoot clear over power lines to surface-apply manure and start draining the lagoons.

“We had to get it done,” recalls Reid. “And we saved our dairies from a lot of trouble with the EPA.”

Helping customers comply with state and federal regulatory agencies is another part of McLain’s service.

“We do a lot of record-keeping for our customers,” McLain says. “We keep manure records in Excel so we know how many gallons of manure we have in any part of a field, and we monitor changes in N, P and K in the samples we take.”

Growth opportunities
McLain has been working to stay on top of advances in high-speed radial flotation tire technology.

“If we can get more speed in the future, that’s my ticket to expansion,” he says. “I can haul more gallons, and I can knock those tractors out of the way.”

He also sees great potential for his business to spread to other areas, either directly under his management or in some sort of franchise-like arrangement with other innovative custom applicators. McLain says he can envision an arrangement in which he trains teams of applicators to bring his business model home to their markets.

Of course, lesson one would be outfitting trucks the McLain way. “We can do things on these tires that you couldn’t do on a regular truck,” he says. “We can embrace new challenges.”