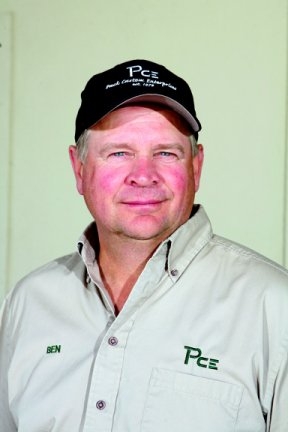 Puck was raised on a family farm in rural Iowa and had intended to continue the family tradition of farming. In 1979, with the U.S. farm crisis looming, he sought out ways of bringing in some additional revenue. Along with his brother, he began pumping and hauling liquid manure for area farmers. Four years later, he began running the business solo.

In 1998, Ben Puck Pumping had continued to grow and Puck incorporated the business as Puck Custom Enterprises. As he added additional manure services to the business, he realized there was room for improvement with regards to the equipment he was using. In 2005, PCE built its own hose cart for drag hose manure application. That piece of equipment received a U.S. Patent in 2009 (Puck has received four other equipment patents over the years for his inventions to improve manure application).

PCE’s drag hose service grew steadily over the years and, in 2010, the company tapped the SBA’s 504 Fixed Asset Financing program to help finance a new building for equipment manufacturing and sales. Since then, PCE has used the SBA 504 program three additional times to help expand its facilities and purchase additional equipment.

Puck and his company’s contributions to the community of Manning are significant. The growth of his business has fueled the type of employee growth that’s vital to rural communities like Manning. Aside from the economic impact he’s made, Puck supports local churches, schools, businesses, charities and other community organizations. Whether it’s through monetary contributions or contributions of time – such as taking a leadership role in the IKM-Manning School’s STEM program – Puck, his family and PCE have been invaluable to Manning’s efforts to remain a thriving rural community.