An Ohio beef producer fattens his herd in an enclosure with concrete slatted flooring and 10-foot deep manure pits, a set-up that helps simplify manure management. 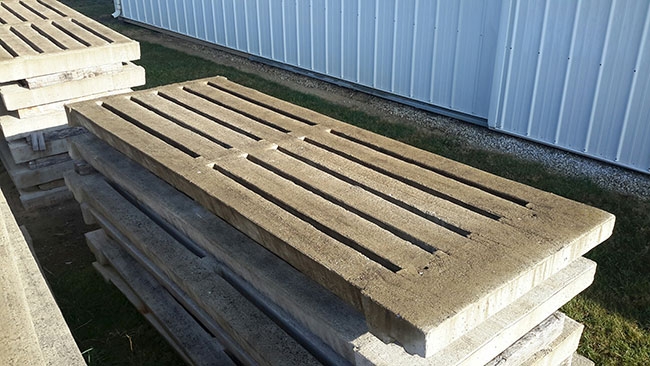 The concrete floor slats used in the cattle barn on the Rom Hastings farm in Ohio measure about 4-feet by 10-feet and lasted 28 years without needing any replacement. Contributed photo

Forget about cleaning cattle pens. An Ohio feedlot owner has taken the approach of housing his herd in a well-ventilated barn on slatted concrete floors. Manure collects in pits below the cattle pens, with the partially enclosed barn offering the cattle shelter from the elements.

Rom Hastings – co-owner of Hastings Farms General Partnership, along with his wife, Jodi, and son, Cody – says he doesn’t need to clean the barn except to pump out the collection pits below the concrete slatted floor once a year. The movement of the cattle within the pens propels the manure through the slats.

“As far as a slatted floor and manure collection pit operation, that is kind of unique for this area,” says Hastings. “At the time that the barn was built, it was probably state-of-the-art in the county … the cattle sleep and stand on those concrete slabs and the slabs have never been scraped since the barn was built, no power washing, nothing.”

Nor is there is any bedding used in the barn pens, which Hastings says is what he appreciates most about the barn enclosure. There is no need to handle and haul bedding out of the facility with this management system. And because the barn is well-ventilated, there is no requirement for fans or fly control. Also, in terms of potential accumulation of frozen manure on the floor in cold weather, Hastings says it has to be zero degrees for several days before he notices any accumulation.

A technical review of slatted concrete flooring suppliers shows that today, there are a number of suppliers aiming their products primarily at the hog and dairy industries, however, there is little or no mention of the beef cattle industry. For its time, it appears that this manure management method adopted by the Hastings for raising beef cattle was definitely breaking new ground.

The barn enclosure was designed by Hastings’ father and the landlord who owned the farm back in the early 1980s, with the expressed purpose of having a facility big enough to house a fairly large herd but with the need for minimal effort to manage the manure. At the time, Hastings, his father, and the landlord were partners in the cattle business, with Rom purchasing the farm in the early 1990s, eventually setting up a partnership with his wife and son.

The building design came about from investigating other barn enclosures as well as working with experts at Ohio State University (OSU).

The structure cost about $1 million to build in the early 1980s. Hastings says to build the same structure today, depending on the approach and who builds it, he estimates that it could be built for about $1.5 million.

When people think of raising cattle, they often picture places like Alberta or Texas. But Hastings says the part of Ohio where he is located has a long history of cattle farming, although like so many other branches of agriculture, cattle businesses have had to get bigger to survive. Hastings Farms is probably the largest beef cattle endeavor left in their county, with many smaller operations having shut down.

The approach of raising cattle in an enclosure with a manure collection system below the floor is markedly different from places like Texas, where large cattle herds sometimes numbering in the thousands are typically raised in open pens in feedlots. The accumulated and packed manure is scraped out and usually land applied as needed. Hastings says his approach of providing an enclosure offers his cattle herd with protection both winter and summer in an area that really needs it. The Ashville, Ohio, area where the farm is located typically accumulates about 25 inches of snow per year. Ashville is about 15 miles south of the state capital of Columbus.

Feeding the cattle is also easier. Storage silos were constructed right next to the enclosure and in addition to the cattle, the barn roof protects an alleyway that is wide enough to accommodate a tractor and mixer wagon used to fill the concrete feeding bunks daily.

Currently, Hastings Farms manages a cow-calf operation essentially for breeding stock consisting of two herds with 30 head of cattle per herd raised on pasture – one being on rotational grazing and one not. The maturing calves from this operation are raised in the barn enclosure. The farm also purchases 300 yearlings annually that it raises within the barn. They consist of about 90 percent Black Baldy cattle, the rest being some Herefords and cross Charolais. Each yearling comes in at about 800 lbs and they feed them to 1,350 lbs. The cow-calf herd on pasture are a Black Angus cross breed.

Hastings says he purchases the yearlings from beef cattle farmers who don’t have the land base to grow the food necessary to raise their cattle to full maturity. He does have that capability.

Hastings Farms also manages a large, no-till, cash crop business on 4,300 acres of corn and soybeans, and about 200 acres of winter wheat. Of that cropland, the farm owns 1,600 acres, with the rest rented. All the feed used in the cattle operation is grown on the farm, and the manure pumped from the barn collection pits is applied and rotated typically on a four-year rotation as organic fertilizer on Hastings cropland.

The all-wood barn structure which houses the yearlings and maturing calves from the breeding herd measures 60-feet wide by 300-feet long. It is enclosed on three sides with the south side of the barn left open. The north side is walled in and windows installed about five feet above ground. Where the north sidewall meets the roof, there is about an 18-inch space for good ventilation from the rising manure fumes. The roof is metal and insulated to control how much the enclosure heats up in summertime. Inside the barn, there are eight pens. Each pen, measuring 30-feet by 36-feet is capable of housing 40 head of cattle, meaning that there typically are about 320 head of cattle in the barn at a time. An alleyway runs along the front of the pens so that feeding equipment can drive into the barn to deposit feed into concrete bunks placed in front of each pen.

The cattle in the pens stand on concrete slats, with the manure they generate dropping into 10-foot deep pits below each pen. There are a total of four pits below the entire cattle pen space, with each pit collecting manure from two pens.

The concrete slats – manufactured by United Precast Industries located in Mount Vernon, Ohio – are replaceable, and fit together in segments. Each segment measures 4-feet by 10-feet and there are 216 concrete slabs in the entire structure. Hastings says they went about 28 years before having to replace some of the concrete slabs, and that was only because the edges on some of the slabs were starting to chip off, making it harder for the cattle to walk on. Since the barn was built, they have replaced about 25 slabs.

There is spacing on each concrete segment of about 1.5-inches for the manure to fall through. Although beef cattle are hooved and can sometimes become nervous about certain types of materials beneath their feet, which is why Texas gates are so effective, Rom says that the cattle in his barn don’t react nervously walking on the slatted concrete floor. However, he is careful about how mature the animals are before he houses them in the barn to avoid the potential of younger cattle catching their hooves in the openings.

“The slatted floor is flat,” says Hastings. “The only thing is that the cattle need to be 500 lbs or bigger to be housed in there. You don’t want any small, weak calves in this facility because the smaller animals tend to have more hoof damage.”

Once a year, Hastings uses a Houle agitating pump to mix and remove the manure from each pit and load it into a 5,300-gallon Houle tank for land application. There is no water added to the manure collected in the pits, which have a capacity to collect manure for an entire year before needing to be cleaned.

The pits are pumped out either in July or September, with the manure surface applied either on harvested hay or wheat crops. Hastings says luckily the farm is still allowed to surface apply the manure in his county without incorporation because his farmland is generally flat, with not a lot of concern about potential surface runoff. The entire process of pumping out the pits and land applying the manure only takes about 40 hours, or four 10-hour days.

“On farms where the manure is surface applied, I’d say that it cuts down my fertilizer costs by 30 percent or more,” says Hastings.

The organic fertilizer is supplemented with commercial fertilizer as needed, based on soil sampling conducted every 2.5 acres.

Over the 35-year history of the barn enclosure, it has proven its worth for manure management as well as providing a comfortable environment for the herd. Because the enclosure is properly ventilated, the cattle raised inside have experienced no health issues.