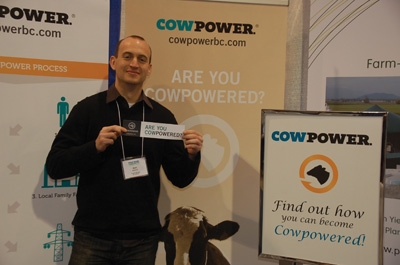 Matt Dickson’s goal is to find B.C. Hydro customers who would be interested in helping to support at least 500 anaerobic digester projects. David Schmidt

Half of what a poultry farmer produces is waste. The percentage is perhaps a little smaller but just as significant for livestock producers.

Over 100 B.C. poultry and livestock producers attended the second-annual Pacific Agri-Energy Forum at the end of January, hoping the experts would tell them that income is just around the corner through the use of anaerobic digesters.

The potential exists but it is still far from being a reality for most farmers. Etsell notes that there need to be regulatory changes, a service infrastructure and increased returns to make anaerobic digesters viable in B.C.
“We’re still struggling with economics since we live in an area with the cheapest energy costs in North America,” he says.

The BCAC has taken the first step in that direction by using the forum to launch Cowpower!

At present, there are two digesters in the province, both in the Abbotsford area where B.C.’s poultry and dairy industry is centered: Catalyst Power is a large plant producing biomethane and Bakerview Eco-Dairy is a small demonstration project generating electricity.

The province’s natural gas utility, Fortis BC, has demonstrated its interest in anaerobic digesters by providing financial and logistical support for Catalyst. It paid for an upgrader to scrub Catalyst’s biomethane so it can be injected directly into the natural gas line that runs right by the property.

“The idea is to extend the concept of what we do,” says Fortis BC business development manager Scott Gramm.

To pay for the additional cost of the Catalyst biogas, and similar projects in future, Fortis BC has started a program where consumers can choose to “stop waste from going to waste” by agreeing to pay extra for renewable natural gas.

“For about five dollars more per month for the average home, you can designate 10 percent of the gas you use as renewable natural gas,” the Fortis website states.

The program is currently available only to residential gas customers but Fortis will soon offer a program for commercial users, which will also make them eligible for a 10 percent credit on B.C.’s carbon tax.

“We’re happy with where the [residential] program is at,” Gramm says, noting it is already about one-third subscribed.

While experts believe using anaerobic digesters to produce biogas is viable, the cost of the upgrader and availability of a nearby natural gas line severely limits the number of farms able to take advantage of biogas. Most B.C. dairy and poultry farms are therefore restricted to using their digesters to generate electricity. There are two programs they can use to supply electricity to B.C. Hydro. The first is the Net Metering Program, aimed at small projects generating 50 kW or less.

“The Net Metering Program is intended for producers who are generating power to offset their own needs,” explains Laura Creech, BCH energy planning and economic development manager. “You generate power to offset your needs and we buy any excess. At the end of the year, the power you provide and the power you draw are reconciled and we pay you for the difference.”

Unfortunately, the program’s rate is only 8.16 cents/kWh, although it is expected to increase to 9.99 cents/kWh.

That would bring it closer to the BCH Standing Offer Program rate. Designed for 50 kW to 15 MW generators, the SOP offers 20- to 40-year contracts at rates ranging from 9.486 cents/kWh in the Peace region to 10.369 cents/kWh in the Fraser Valley. However, the program also requires special permits and interconnection costs not charged under Net Metering.

Even B.C. Hydro admits that is not enough to make anaerobic digesters viable.

“Projects producing under a megawatt of electricity [which would be the case with most on-farm digesters] tend to struggle,” Creech says.

That’s where Cowpower! enters the picture, a program similar to the Fortis BC program but designed for electricity rather than biogas production.

Under the program, consumers voluntarily sign up to pay an additional 4 cents/kWh for 25, 50 or 100 percent of the electricity they consume. Residential consumers may sign up for as short a period as a month although commercial customers must sign a three-year contract.

The additional fee is for the anaerobic digesters’ “environmental attributes,” such as the additional benefits that result from the production of that electricity. These include reduced greenhouse gas emissions and odor from waste systems, increased water and food safety, environmental protection, nutrient recovery, and support of local farms.

Producers who put in an anaerobic digester will receive the additional Cowpower! funding for five years, meaning they will receive a total of 13 to 13.5 cents/kWh for their electricity. Ethan Warner of CH4 Biogas believes this should make some projects move forward. He says farmers need a ready supply of on-farm manure and at least 25 percent non-manure waste to make a digester viable.

If the electricity generated through anaerobic digesters does not meet the demand for the Cowpower! program, excess funds will be used to provide additional incentives.

His goal is to find “0.5 percent of B.C. Hydro customers” who would support at least 500 AD projects.
Warner doesn’t believe that number is likely unless the rate increases even more. He believes the rate needs to go to 16 to 19 cents/kWh before there will be wholesale adoption of anaerobic digesters.

John de Jonge, a partner in Avatar Canada, the company that built the Bakerview anaerobic digester, says the aim of the demonstration digester is to “show farmers the technology first-hand,” and determine the value of other benefits of an on-farm anaerobic digester.

The Bakerview anaerobic digester, which uses the manure from 50 cows plus 11 percent milk fat, generates about 20 kWH. While this is not commercially viable, deJonge notes the Avatar system is scalable and may not need a much larger farm than Bakerview to be viable.

“We are trying to determine how many different things we can produce with the system,” he says.

In addition to heat energy and electricity, the anaerobic digester’s solid residue is used to produce bedding for the cows while excess nutrients are recovered from the liquid effluent by a trickle filter.

“If we can show the additional benefits the anaerobic digester provides, it will make the system more attractive to farmers,” de Jonge states.

Even before it was officially launched, Dickson says the Cowpower! program has started to gain traction. The Pacific Agriculture Show was “Cowpowered” and he expects other local green-conscious businesses to follow suit.

Eric Powell of Washington State University, who is involved in a digester project at Vanderhaak Dairy in Whatcom County, across the border from Abbotsford, notes there are now seven anaerobic digesters in Washington state, all producing electricity.

He agrees that digesters need to do more than just produce electricity for farmers to adopt them. Like the Bakerview digester, the patented Vanderhaak system includes a fiber separator to produce bedding and a treatment system to remove phosphorus from the effluent, which then becomes liquid fertilizer.