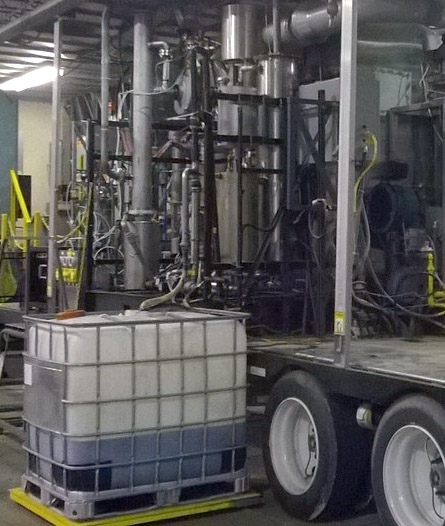 Battelle experts recently surpassed the 1,200-hour mark of continuous operation on a single catalyst during hydrotreatment of bio-oil created by a mobile catalytic pyrolysis unit. Marketwired.

April 22, 2015 – Scientists at the U.S-based company Battelle recently succeeded at the United States Department of Energy (DOE) challenge of making commercially viable transportation fuels from biomass pyrolysis. The team demonstrated the durability of a continuous hydrotreatment process that converts bio oil from biomass pyrolysis into transportation and aviation fuels.

The DOE’s specific challenge was to demonstrate at least 1,000 hours of bio oil hydrotreatment on a single catalyst charge, while producing a fuel product suitable as a transportation fuel-blend stock at commercially realistic yield. Longevity of hydrotreatment catalysts has long been the Achilles’ heel for converting biomass pyrolysis oils to biofuels. Battelle, with its proprietary process and the help of Pacific Northwest National Laboratory (PNNL), was able to overcome and surpass this hurdle relatively quickly, and now has successfully registered more than 1,200 hours on its hydrotreatment catalysts. Scientists and engineers have set their sights on achieving the commercial standard of 4,000 hours in the near future.

Zia Abdullah, Institute Fellow at Battelle, was the principal investigator on the project.

“I am grateful to the DOE for their partnership in this effort and to Battelle’s leadership for their ongoing commitment,” says Abdullah.

Marathon Petroleum Corporation provided Battelle with some support in the DOE and helped in assessing the biofuel product. Scientists at PNNL developed bio oil stabilization catalysts for Battelle’s process.

John Holladay, manager of the biomass sector at PNNL, agrees. “This is how public-private partnerships are supposed to work and it couldn’t have happened without DOE’s support,” he says.

Battelle’s leadership is committed to biofuels but see the best near term market opportunities in biochemicals. “Biochemicals to enable biofuels,” notes Drew Bond, vice president for technology commercialization for Battelle’s energy, health and environment business. “Simply put, that’s our strategy. And we’re not alone in this but I can say that we are quite far along thanks to the foresight of our leadership.”

“Energy security is all about energy supply diversity,” he says. “We have tremendous fossil reserves in our country that should not be taken for granted. But neither should we take our renewable resources for granted. That’s why our work at Battelle spans across both, with the goal to maximize our fossil and renewable resources, which aligns with the President’s “all the above” strategy in the energy sector.”

Battelle has also made significant progress towards commercializing its modular pyrolysis systems. It already has scaled up its proprietary technology from concept to a pilot system that processes more than one ton of biomass per day.

It was Battelle’s ton-per-day pilot system that supplied the bio oil for its DOE-funded hydrotreating project. Adding to the achievements and near-term commercial focus, late last year Battelle entered into a strategic partnership with Equinox Chemicals, a specialty chemical manufacturer. Together, they seek to use the platform pyrolysis technology for the production of biopolyols and biochemicals with applications in multiple, rapidly growing, high-value markets.