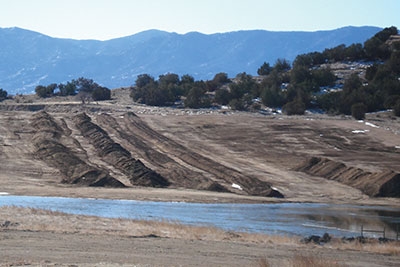 Anaerobic digestion of cattle manure has not taken off in the arid western United States like it has in other parts of the country. That’s despite states like Colorado recently being rated as being among the top five cattle and dairy producers in the country. The main reason it hasn’t taken hold in this part of the United States is water scarcity. Water is a critical factor in anaerobic digestion.

Researchers at Colorado State University believe this method of manure disposal might still work under the right circumstances. For that reason, they have created an online decision tool for use by both cattle feedlot and dairy farmers to help them determine if anaerobic digestion of their manure could be a viable option.

There are many cattle operations in Colorado with more than 20,000 head, according to lead developer of the online tool, Dr. Sybil Sharvelle, associate professor in the Civil and Environmental Engineering Department at Colorado State University. She was hired by the university about six years ago to investigate animal waste management in the state and how it could be improved.

She says each dairy or feedlot animal will generally produce between 100 to 150 pounds of manure per day, meaning that one 20,000-head feedlot alone will generate in excess of 1,500 tons of manure per day. The primary method of manure disposal in Colorado is composting, and while some feedlots are able to sell the compost for land application as an organic fertilizer, many are located in areas where crop production is not ideal. So Dr. Sharvelle says the compost is often left piled at the facility, which is why researchers are encouraging cattle producers to at least investigate anaerobic digestion as a possible alternative method.

At the present time, Colorado has only one hog operation using anaerobic digestion as its manure disposal method; development of another digester using waste generated from a dairy operation is on the drawing board and likely to move forward. Dr. Sharvelle would like to see more Colorado farm businesses involved in the generation of significant amounts of cattle manure take a serious look at the anaerobic digestion option, which is one of the primary reasons why the online decision tool was developed.

“I’d like to encourage it when feasibility is good and it can be economic,” says Dr. Sharvelle. “I think any time that we can turn a waste into a resource, we should take advantage of that. I want to encourage it where it makes sense, but it doesn’t always make sense.”

Anaerobic digestion is where raw manure is typically pumped into the top of a tank and over time in a low oxygen environment, microbes convert the manure into three valuable streams – biogas, a high nutrient liquid stream, and solids where many of the harmful pathogens have been destroyed. Once dried, the solid byproduct can be reused for bedding in dairy operations and also as an organic fertilizer. The liquid stream is often used as fertilizer because of its high nutrient content and sometimes recycled as wash water in a dairy. The biogas is a valuable commodity that can be used to fuel a power generator to produce power for use on a farm or sold to a local utility through a power purchase agreement. All three streams represent highly valuable commodities that often make or break the economics of using this manure disposal method.

Water is a critical component of the anaerobic digestion process and this is a commodity that is sometimes scarce for cattle feedlot and dairy owners in states like Colorado, Wyoming, Montana, New Mexico, as well as parts of Canada. The Colorado State University online tool was developed following a series of feasibility studies that included collecting samples, investigating the quality of the waste generated and interviewing cattle operators about their waste management methods to find commonalities within their operations. The result was an online tool that was specific to the Western arid region.

Regarding dairy operations, tool developers state that for the use of conventional anaerobic digestion technology on dairy facilities, manure should be collected on concrete by scraping or flushing. They go on to say that, “anaerobic digestion of manure collected on dry lots is not feasible with conventional technology,” and Dr. Sharvelle says that at the time that the online decision tool was developed a few years ago, researchers could say with a fairly high degree of confidence that economically speaking, this was the case related to the potential use of this manure processing method for dry lot feedlots. The issue at that time was not only potential scarcity of water in the arid western region, but also the typically high percentage of inorganic solid debris mixed in with the manure in a dry lot operation and how it could potentially clog up an anaerobic digester.

She says there have been advances in this area and there is at least one example of anaerobic digestion technology developed in Canada, which claims to be able to manage the debris from a dry lot cattle operation. They are operating a demonstration plant attached to a feedlot. While it may be technically possible to process this dry feedlot manure through an anaerobic digester, Dr. Sharvelle says it ultimately comes down to the economics. Access to reliable sources of waste water, pre-processing costs because of the amount of debris mixed in with the manure, the availability of government subsidies, the savings that farms can realize by displacing the power they purchase with their own generated power, and the income that farms can negotiate for selling power produced from anaerobic digestion all factor into the equation. While on-site use of power creates a more favorable economic scenario, the challenge of managing the solid debris mixed in with the manure during anaerobic digestion is daunting.

The idea of simply adding water to the dry lot manure is addressed within the online tool as part of the economic analysis but because water is so expensive in Colorado, this does have a direct bearing on the viability of using anaerobic digestion in this application. However, the university isn’t giving up.

“We are developing in our lab a technology to address that high solids manure that is collected in dry lots,” says Dr. Sharvelle. “We are looking at new technologies that would make more sense.”

The online decision tool is a good resource to investigate all the options and challenges the user to determine not only if anaerobic digestion of cattle manure is technically feasible, but also if it makes economic sense. The tool addresses those issues separately. It works on a traffic light principle, where individuals are prompted to plug in certain critical criteria about their operations that have a direct bearing on the viability of anaerobic digestion for them. Depending on the data inputted by the user, the tool will deliver a green, yellow or red light as to the applicability of this disposal method as the user proceeds through the prompts. Once they hit a red light, they know they should stop because the tool has determined that something in their operation is a critical impediment to anaerobic digestion working for them.

Some of the most critical questions the online tool addresses are the size of the herd and the operation’s current method of waste management. The tool prompts the user to consider if there are nearby sources of wastewater that could be added to their waste stream to make anaerobic digestion feasible.

“Most facilities don’t want to change how they manage their manure to install an anaerobic digester,” says Dr. Sharvelle, “because it just adds too much cost and change at one time. So, the tool looks at what their management practices are and it also gets some information about whether there are nearby sources of wastewater from possibly food processing facilities or domestic wastewater treatment facilities that could be combined with their manure.”

The tool also addresses the issue of information reliability. Prior to the tool coming on line, farmers had to depend on the information provided by suppliers of anaerobic digestion systems, and in some cases, those systems were not a good fit for particular cattle operations. Tool designers have strived to provide unbiased information related to different anaerobic digestion systems so that cattle owners can find one that is a good match for their operation.

The two biggest challenges in developing the online tool were to ensure that it was user friendly and also that it took into account the variety of cattle operations in the state so that users could gather useful information applicable to their specific operations. Most of the important questions are asked early on so that if users obtain a red light at this point, they know right up front that it won’t work for them.

Since becoming available about two years ago, Dr. Sharvelle has received feedback from producers that they have found the tool helpful. The challenge now is to keep the tool up to date.

The data that was collected to create the tool initially dates back four years. The goal now is not only to keep it up to date but also to broaden its application so that it can be useful to cattle operations throughout the United States, particularly when addressing the economic practically of using anaerobic digestion as a manure disposal method.

The tool can be accessed at https://erams.com/AD_feasibility_ad_tool/.