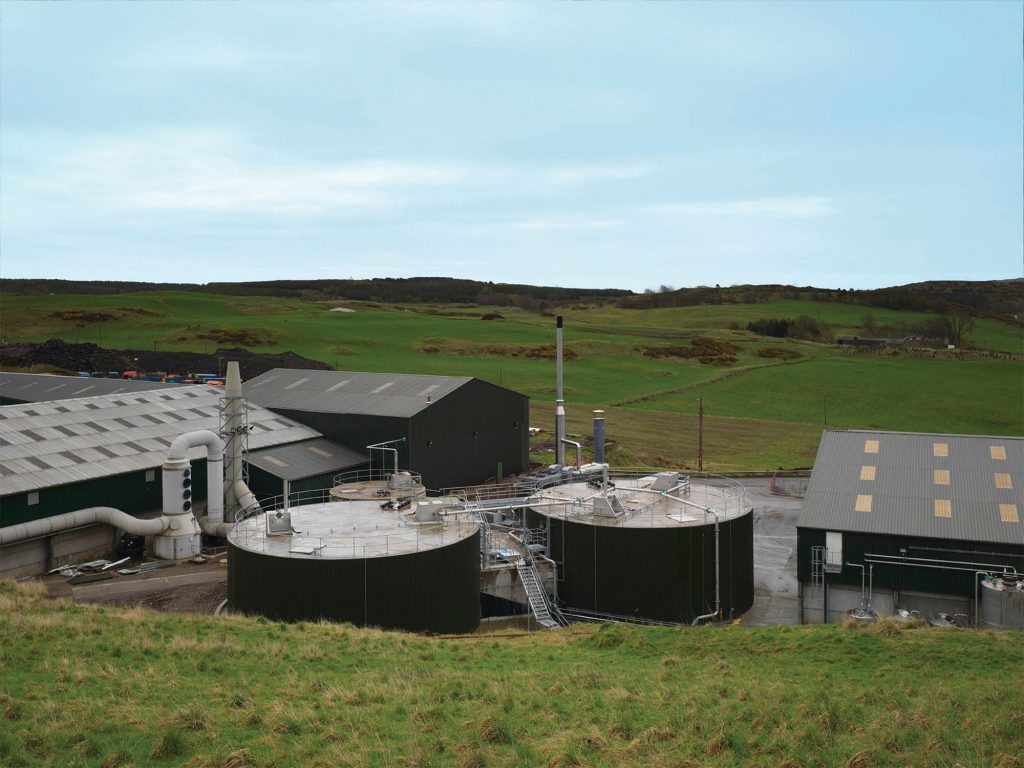 Oct. 2, 2012, Burlington, ON – UTS Biogastechnik GmbH (UTS Biogas), a subsidiary of Anaergia Inc., a global leader in the generation of renewable energy from organic waste, announced the successful commissioning and operation of an anaerobic digestion facility in Glenfarg, Scotland, as well as the award of London’s first food waste to renewable energy facility that will be located in Dagenham, UK.

Food waste and other organics typically represent 30%-40% of the waste generated in a given community.  In order to divert this organic waste from landfill and beneficially use, Source Separated Organics (SSO) programs are being implemented across a variety of venues including single family residences, multiple family residential units, commercial businesses, food processors, grocery stores, schools, airports and hospitals.  Anaerobic digestion technology is then used to convert this energy rich organic waste into renewable energy and natural fertilizer.

A partnership agreement between The TEG Group and UTS Biogas, a subsidiary of Anaergia Inc., was established to deliver scalable and adaptable solutions that combine in-vessel-composting and anaerobic digestion under a Design-Build-Own-Operate-Finance (DBOOF) model.  The Dagenham and Glenfarg facilities utilize the DBOOF model and will both operate under 20 year power purchase agreements owned and operated by The TEG Group.

Anaergia provided the anaerobic digestion system to the Glenfarg facility in Perthshire, Scotland that is owned and operated by TEG Biogas (Perth).  The newly added biogas facility is currently processing 15,000 tonnes per year of residential and commercial food waste into 700 kW of renewable energy. The renewable electricity is distributed through the national electrical grid and heat produced onsite can be supplied to the new Binn Eco Park development.  The organic residual from the digestion of food waste is converted to soil amendment that is sold to local farmers in order to replace conventional chemical fertilizers.

Anaergia is also under contract to provide a second anaerobic digestion system to the TEG Biogas (London) facility in Dagenham about 35 km outside of London.  The total treatment capacity will be 49,000 tonnes per year, 19,000 tonnes of which will go to the in-vessel-composting plant. The anaerobic digestion facility, will convert the remaining 30,000 tonnes per year of London’s food waste into 1,400 kW of renewable energy.  Combined, the two UK based projects will generate nearly 17 million kilowatts of renewable energy each year which is enough to power the equivalent of approximately 3,500 homes.  In addition, these projects will prevent 900,000 tonnes of food waste from entering landfills during the 20 year contracts.

Mr. Boris Johnson indicated, “We are set to support more facilities of this nature across the capital working with boroughs and the London Waste and Recycling Board.” (September 4, 2012 – Waste Management World)

“These projects demonstrate forward thinking and environmental stewardship by selecting anaerobic digestion technology to generate renewable energy while diverting food waste from landfills,” said Ludwig Dinkloh, Vice President of UTS Biogastechnik.  “We are proud to be a part of the London Sustainable Industries Park and the Binn Eco Park due to the contribution they make to a sustainable environment as well as their contribution to the local economy through the development of hundreds of new jobs.”

“Our first co-located anaerobic digestion and in-vessel-composting plant became operational in Perthshire earlier this year and is testimony to our confidence in the benefits of co-located organic waste technologies,” says Mick Fishwick, CEO of TEG. “Combined anaerobic digestion and in-vessel-composting sites offer front-end flexibility on feedstock, enabling us to process a wide variety of waste streams including food waste only, green waste only or co-mingled organic waste.  We have been delighted with the performance of the Anaergia Anaerobic Digestion plant at Glenfarg, which has already exceeded the planned power output, and we look forward to working with UTS again in delivering the AD plant in Dagenham.”

“These projects are a further example of the global trend to divert waste organics from landfills and convert them into renewable energy and natural fertilizer using anaerobic digestion technology.  We are proud of our partnership with TEG and believe that offering anaerobic digestion technology under a power purchase agreement is an emerging service model with strong benefits to communities.  The model provides competitively priced renewable energy, extended landfill life and a smaller carbon footprint without a capital investment by the communities,” said Steve Watzeck, CEO of Anaergia.  “With more than 20 years of experience using anaerobic digestion to generate renewable energy from high strength organic waste, Anaergia is well suited to support municipalities reach their sustainability goals and reduce costs.”

The TEG Group Plc owns a proprietary and state-of-the-art composting technology, the TEG Silo Cage System, and has partnered with UTS for the provision of anaerobic digestion technology into the UK waste markets.  The TEG Group Plc has provided reliable solutions for handling organic wastes since 1995.

Anaergia Inc. (www.anaergia.com), is a global leader in the generation of renewable energy from organic waste streams.  Anaergia offers the widest range of anaerobic treatment solutions for municipal, industrial, commercial and agricultural markets.  Anaergia and its subsidiaries, including UTS Biogas, have over 20 years of experience and are trusted at over 1,600 biogas plants worldwide.