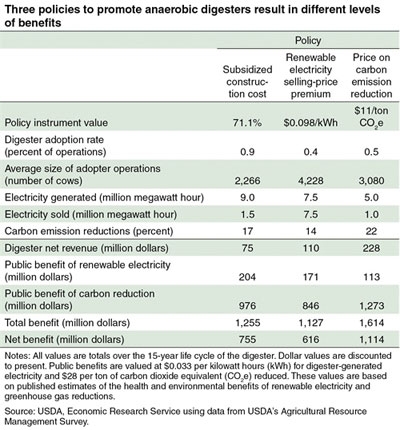 Anaerobic digesters capture methane from lagoon or pit manure storage facilities on farms and use it as fuel to generate electricity or heat. In addition to providing renewable sources of energy, digesters can reduce greenhouse gas (GHG) emissions. Methane is a potent greenhouse gas and burning it lessens its contribution to global warming. Rising fuel prices and the public’s desire for new sources of renewable energy and reduced carbon emissions have led to government policies that support the adoption of anaerobic digesters by livestock producers. A USDA Economic Research Service (ERS) study considers how the design of such policies would affect farmer adoption rates of digesters, farm incomes, and environmental benefits from use of the technology.

Policies currently in place in the U.S. that aim to make digesters more profitable for operators include:

The ERS compared these three policy approaches in terms of their effect on operator net returns, digester adoption rates, electricity generation and sales, GHG emissions, and program costs. For each policy, researchers also estimated the net benefits to society from greater renewable energy production and lower GHG emissions plus the increase in producers’ profits from digester adoption, net of the policy costs.

Under a scenario with a hypothetical policy budget of $500 million over a 15-year period, the construction cost-share program (providing a 71 percent subsidy) was found to induce the largest number of operations to adopt a digester and stimulate the most renewable electricity generation. The carbon pricing policy (paying $11 per ton of carbon dioxide equivalents) was the most effective mechanism for reducing GHG emissions from dairy manure management, and the renewable energy subsidy (resulting in a price premium of 9.8 cents per kilowatt hour of renewable electricity) encouraged the greatest amount of electricity sales.

While farmers might not necessarily find it profitable to adopt a digester without any government financial assistance, the study shows that public programs can stimulate digester adoption that results in substantial environmental benefits.