Features Business/Policy Canada
After the flood 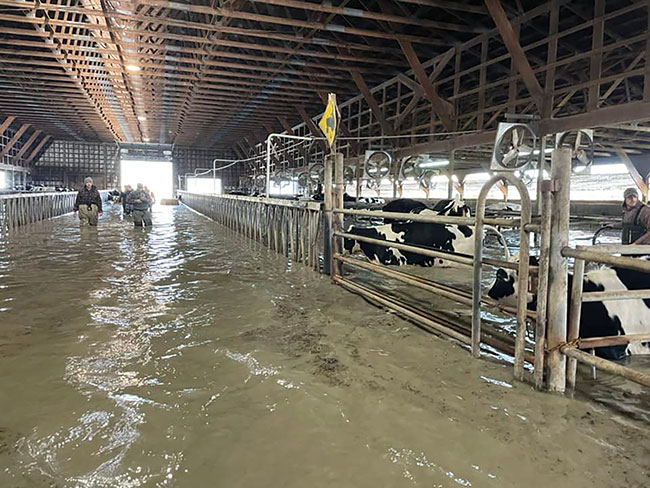 Richard Bosma’s barn on the day off the initial rainfall. All images courtesy of Richard Bosma

Richard Bosma knows one thing: he refuses to let this flood be what finishes him and his dairy farm off.

Bosma is part of the team that owns and operates Vedderlea Farms, a dairy farm in Abbotsford, B.C. Like many other B.C. farmers, he’s spent the last two months putting the pieces back together after the events of an historic November rainfall.

The cause of the flooding was a meteorological phenomenon known as a Pineapple Express,  a type of atmospheric river driven by a strong, southern branch of the polar jet stream. The onslaught began in earnest on Nov. 12, and the final event lasted until Dec. 1. The effects were both short- and long-term, from damage to land and infrastructure, to severe transportation disruptions. One of the primary concerns was the disruption of key transportation corridors – including sections of British Columbia Highway 1 (part of the Trans-Canada Highway), Highways 99, 7 and 3, and the Coquihalla Highway. With road and rail disruptions, livestock feed was limited. Between housing concerns, the physical effects of the flood and an unstable flow of food, dairy farmers have been dealing with the fallout in their herds ever since. To add to that, some farmers are facing pressure on their manure storage.

Bosma considers himself among the lucky. A small number of his heifers had to be euthanized in the fallout of the flooding due to pneumonia. But he was still able to successfully relocate his 75 cows in a short amount of time.

The morning it began, Bosma and his wife received a knock at the door from local authorities urging evacuation. At first he and his wife were unsure, but by midday, they were in full evacuation mode. “I didn’t even ask where [the cows] were going. Some guy just said, ‘I’ve got a farm for them.’” Bosma estimates that there are between 300 and 400 farmers in the Fraser Valley area, about 60 of whom were acutely affected by the floods, so many of the remaining offered to take cattle. Some herds, like Bosma’s, were able to largely stay together; others had to be split up or moved multiple times.

From the knock at the door to the return home of Bosma’s last cow, that stage of the journey lasted 32 days.

Health and safety effects
According to Holger Schwichtenberg, chair of the B.C. Dairy Association, a total of 6,000 cows across 62 farms in the Sumas Prairie area were evacuated. He was among those who took in other cows, as did his neighbors. But thousands of other cows had to stay put. He estimates that between 12,000 and 14,000 cows had to stay in their barns. Beyond the flood, there were long-term health impacts. Pneumonia and physical injuries were the two biggest impacts to Bosma’s herd. While only a few of his had to be euthanized, the provincial total for cow deaths from the flood and resulting illnesses or injuries is 420, plus 12,000 hogs and 628,000 poultry. Schwichtenberg says farmers are also experiencing other concerns – such as milk production.

“If you’re a cow standing in water for four-and-a-half days and you’re 220 days into your lactation… you’re not going to turn the tap back on.”

Prolonged lack of healthy food and water affected herds. Schwichtenberg says it’s still early to tell the scale of the long-term effects, but he is sure there will continue to be at least some problems.

The excessive water also put pressure on manure storage systems. Bosma says he lucked out again – of his two lagoons, one is more effluent than the other. “One drains at a high point,” he says, explaining that their size and make made the lagoons almost into artificial dikes. “One neighbor had emptied his whole lagoon in the fall, and then he had the floodwater get back in, so he had to take his big pump and blast it back out again.”

Because of the impact of the storm, the B.C. government had to enact emergency spreading rules. Farmers whose storage systems are facing potential overflow due to excess water, who had to dispose of excess milk in their storage systems due to supply chain issues or who accumulated an excess of manure due to taking on extra livestock are permitted to spread that manure, providing some relief to their storage systems. Spreading is subject to certain conditions, and farm owners must apply for the exemption. 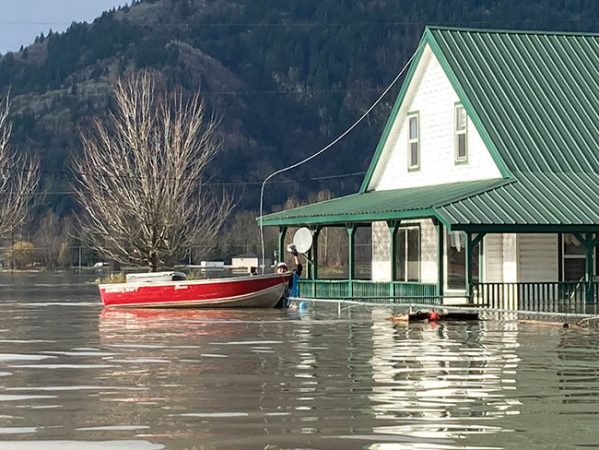 Supply chain woes
The significant disruption to road and rail alike meant both imports and exports ground to a halt. For the everyday BC citizen, that meant mail might have been a little slow. For farmers, that meant not knowing when feed was coming. “We had 500 bales of hay that floated away. We didn’t even know they could float,” says Bosma. “We had no idea when we were going to get our next order of grain.”

Eventually, exceptions were made for transport drivers to divert their route into the U.S. – while it added an additional eight hours onto their drive, allowing anyone with a drivers’ licence to cross the border for the purpose of transporting essential goods made a major difference.

Output is also a struggle. Stan Vander Waal, president of the B.C. Agriculture Council, says many farmers experienced weeks of coming into work only to find out that no trucks were going out.

“We’re almost on an island,” he says. “We’re talking food, we’re talking flowers, we’re talking grains.” He adds that with crops, it might not be known until spring what the long-lasting impact will be of them sitting in water for such long stretches.

Moving forward
Even well into January, Bosma is still feeling the impact. Though the feed is flowing in more reliably now, there are major expenses incurred. The front door of his barn blew off, costing $7,000. And while the community has rallied in ways he never imagined – one farmer donated semen from his top bull to replenish herds, and the B.C. Dairy Association has raised more than CAD $900,000 in donations – Bosma is staying realistic.“I’m not sure how much longer we can highlight it,” he says. “There’s always another disaster in the world.” He adds that addressing the problem of extreme weather on a more long-term basis can’t be solved at a local level and has to involve the U.S. as well.

While he and his farmer brethren know it will be a struggle moving forward, he says he knows for the sake of his own mental health, he has to simply keep pushing through. “It won’t be the flood that finishes us off.” •