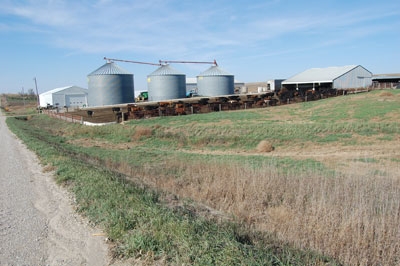 A concrete wall and earthen berm at the Ziegmann Brothers Farm help keep dirty water in the pen and out of the roadside ditches.

The spring of 2010 is one the Ziegmann brothers, Bob and Kermit, will long remember. The snow had piled high in Wall Lake, Iowa, and in early March it began to melt. The ground was frozen, and with no place for the water to go, the snow melt ran downhill, quickly filling the manure containment area for Ziegmann’s 800-head open cattle lots. The containment area overflowed and the liquids made their way to a ditch, and then continued on to a nearby stream. The Ziegmanns were fined and that’s when things got really interesting.

Background
The containment issue didn’t happen overnight. Bob and his brother have been farming for nearly 50 years. Each year their farm grows a little and at the same time regulations get a little stiffer. By 2010 their operation had grown to 1,800 acres (around 1,000 that they can spread on), two 2,500 wean to finish hog units and an 800-head feedlot.

As the farm grew, the Ziegmanns hired Tucker Consulting to prepare their manure management plan. Bob Ziegmann says Tucker Consulting takes soil samples, and ensures spreading is done in the right areas and in the correct amounts.

The manure management plan, however, wasn’t the problem. The Ziegmann brothers had a decade earlier built a containment area for the manure from the feedlots, which no longer met current regulations.

Looking for answer
Bob says he immediately started working with the state’s Department of Natural Resources (DNR) to find a solution that wouldn’t break the bank, but wasn’t finding an answer.

“I kept coming up with ideas, but they weren’t working,” says Bob. “They would tell me that my ideas would help, but wouldn’t solve the problem.”

Things turned around when Bob was introduced to Shawn Shouse, an agriculture engineer with Iowa State University Extension. Shouse frequently works with smaller farms, designing systems that are both effective and economical.

“I and another engineer from Extension met with Bob at the site and spent an afternoon walking around, visiting with him about his objectives and what we thought we might be able to do,” says Shouse. “It took me a few weeks to draw up my suggestion. The hardest part sometimes is just the head scratching on the site trying to figure out how you make things fit with the lay of the land so that it doesn’t cost a fortune to build things.”

Shouse has designed a number of manure containment systems for Iowa farmers, particularly those in the western and southwestern parts of the state.

“The landscape tends to be relatively steep, and it’s a lot more difficult to control that water coming out of the pens on a steep hillside.”

Bob says that once Shouse came on board, pieces fell into place.

The plan
The overall plan was quite simple. Direct any runoff from the first containment center through an underground pipe along the road (and ditch) and down to a secondary containment system in a field on the other side of the building site. If a record rainfall should happen, any liquid that could potentially overflow from the second containment area would overflow into a 40-acre field.

“It’s similar to what a lot of the big permitted feed lots would do in concept,” says Shouse. “It’s the same kind of philosophy, but because Ziegmann are not covered by the federal permit rules, we were able to do it with less expensive construction and materials. Because they’re smaller, they don’t have to store such a huge volume of water.”

Execution of the plan
Bob was able to get right to work with his contractor as soon as he had a plan. It took about five months to go from initial talks to completion.

Most of the work was done outside the two pens. “Nothing had to be done inside the large pen,” says Shouse. “Bob already had a solid settling basin outside the pen. He enlarged it though and put a different outlet to get the water into his underground pipes to keep water out of the road ditch. For the smaller pen, right next to the road ditch, Bob built a concrete wall to hold that water in the pen until he could get it down into the pipeline.”

“We put the cement right down the middle so that I could clean the solids out as soon as possible,” says Bob. “When we clean it out (spring and fall) we use a skid loader and put it in a slinger type spreader and spread it on the fields.”

He adds, “A 700-foot-long, 12-inch-wide pipe now runs along the south side of our site, down to the secondary containment center we built. We cemented about 20 feet of the total containment center where the water enters and the solids settle off first. That way, I can clean that about any time.”

Bob says he uses an electric sewage pump to pump the water off and dry it up. “At this point though I don’t see that much solids get to the secondary holding site because I’m able to capture quite a bit at the first holding area.”

Planning head
There is one area of potential concern, and that’s the underground pipe.

“Any time you use an underground pipe, you have the risk of things either freezing up in the winter, or plugging up with manure solids or grass or something that gets into the pipes,” says Shouse.

“Every 200 feet we put an access tube into the pipe,” explains Bob. “If I ever did plug it, I could water jet it and open it up.  But the way I’m getting the solids out before I drain into the secondary, I don’t anticipate any clogs.”

Change in crops
Bob is also using crops to help handle the manure.

“Over the last few years, we’ve started to grow continuous corn in a lot of ground around the feedlots. Before we used to be a corn/bean rotation, so now I can handle a little bit more [manure].

“We are also putting in a cover crop of rye out on some of the ground, so we take a crop of rye off and then come back in and plant corn or beans. So it’s almost like double cropping and it lets us add a little more manure.”

Another benefit of capturing more of the manure is a lower fertilizer bill. The Ziegmanns still purchase some fertilizer (mostly nitrogen), but the quantity has definitely dropped.

The results
The new system has been running for a year now and is working exceptionally well — no liquids from the feedlots have reached the ditch or stream. It has been a dry year, and the system hasn’t been tested by heavy rains, but Bob is confident that his system is set to handle them when they come.

Shouse says a big part of the success of any system is its management, and Bob is doing a great job.

“A really good manager can make something work without spending a lot of money,” says Shouse. “The more you want it to operate itself without you having to pay attention to it, the more expensive it gets to try to build a system that can do that.”

The finale
Ziegmann’s innovative and economical system was showcased this past October at an Iowa State University Extension field day. Around 40 people showed up to take a look.

“The field day is part of a co-operative effort with ISU Extension and Outreach, the Iowa Department of Natural Resources, the Iowa Department of Agriculture and Land Stewardship, the Natural Resources Conservation Service of USDA, the Iowa Cattleman’s Association, and the Iowa State Dairy Association, and focuses on small, open beef and dairy feedlots,” says Shouse. “We’re looking at those smaller farms not required to have EPA discharge permits. We’re helping them to do a better job of protecting water quality, as many small feedlots are close to streams in Iowa. Ziegmann’s was an example of a small feeding operation that had some challenges and managed to make some really good improvements without spending an awful lot of money.”

Shouse adds, “There are a lot of these small feedlots out there and it’s easy for outsiders to say they should all have permits and do it the way the big ones do. From a water quality point of view, that would work quite well, but some of these big lots spend up to a quarter of a million dollars building those systems. These small and medium size feed lots are typically one-family operations, and it would be like asking you or I to spend a quarter of a million dollars. They just can’t afford to do the same things. So we have to get a little creative sometimes on how we protect water resources economically.”