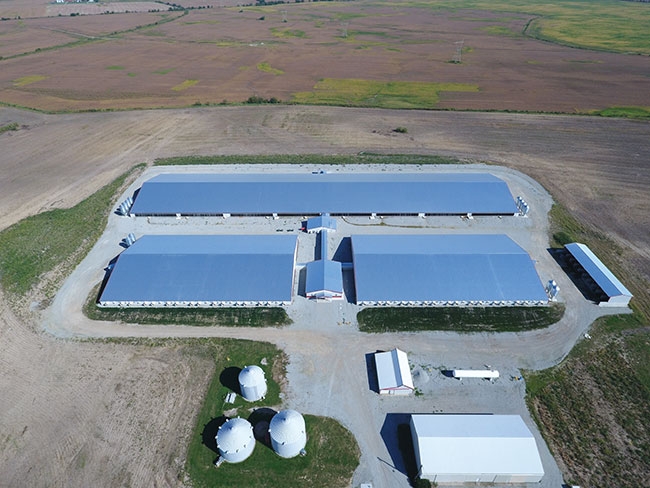 Fine Swine knows how to do things large. In 2017, the Ohio-based swine farm with more than 11 locations and 30,000 sows, built a 6,200-head sow gestation barn, incorporating a dual permanent mass agitation system.

Ben Pitstick, Fine Swine’s operations manager, says they decided to use a permanent mass agitation system before they built the enormous barn, which is 733 feet long by 166 feet wide.

The answer turned out to be a system designed and engineered by Puck Custom Enterprises, Inc. (PCE)

“This system keeps us from putting any kind of agitator in the pit when we’re mixing the pits,” says Pitstick. “We have a 10-foot pit that’s underneath the slatted-floored barn and holds about 9,000,000 gallons of manure.”

The manure is agitated monthly to keep from having solid waste build up, creating a more consistent product that is pumped and spread twice a year on nearby farms.

The manure is agitated at the bottom of the pit, where the solids are pushed through eight, four-inch reducers. The primary benefit is the consistent nutria value and the better break down of solids. But the added benefit is potential for odor reduction. Because the pit is frequently agitated throughout the year, the odor caused by the solids breaking down isn’t as intense as those pits that are agitated on an as-needed basis.

“The assumption is that instead of going in once or twice a year with several tip pumps and aggressively agitating all at once, you’re agitating over the entire year and there’s far less surface disturbances,” says Laura Pepple, a design engineer for Iowa-based PCE. “This creates a safer environment for the animals, I would also expect that it should reduce the immediate odor during application, and would spread that out over the course of the year.”

“I would describe this system as a whole barn agitation system,” says Pepple. “There’s a long pipe that runs the length of the barn and, on the opposite end, it turns 90 degrees. After the turn, there is a manifold that splits off into smaller straws that flow back toward the end that the pump sits on.

“With deep pits, the most common current construction is to put a divider wall down the middle, [like was done with Fine Swine] so you end up with two cells that run the length of the barn,” she adds. “You have pillars, which look like bowling lanes. The idea is that you’ve got a straw centered up in the key lanes where you’re going to have most of your solids build up. And it recycle very much like a bowling lane where a ball goes down and then the mechanism at the end pushes it back to you.”

Knowing the size of the Fine Swine barn – where it houses not only the 6,200 sows, but also weans 3,000 piglets a week – and the volume of waste, Pepple designed two independent agitation systems that run off a single pump with a 12-inch inflow and a 10-inch outflow.

“Depending on the size of the barn, my current recommendation is a pump that’s capable of hitting 6,000 gallons a minute, and it requires a little over 300 horsepower,” says Pepple.

Fine Swine built their own pump, which was installed at the end of the barn, in the middle of the agitation system. It’s equipped with a Tenon mount and is run by a 425 horsepower CAT motor that pumps 6,000 gallons per minute.

“Installing a pump on the side forces liquids to turn at 90 degrees to get to the pump is the biggest obstacle that I typically run into, creating an opportunity for solids to settle out of suspension,” says Pepple. “Because of this, our preference is to put the pump off the end of the barn, because you don’t have to force liquid to turn at 90 degrees [see illustration]. However, Fine Swine’s pump location was taken into account during the design engineering and performs as required.”

The permanent mass agitation system is relatively new. And it’s Pepple’s understanding that is was the brain child of PCE’s founder, Ben Puck some years back.

“The beauty behind the system,” she says, “is the only moving part is the pump, and it is exterior to the whole system.”

And the idea has grown in popularity. Because the concept seems simple, some farmers have tried to install their own system. In a number of cases, winging it has resulted in poor results or even failure. To maintain the integrity of the system, Pepple stressed the importance of actually taking the time to engineer the design plan of the system.

“Every system that we’ve got out in the field has been engineered. We do that to ensure that the pump, and the performance that the producer is trying to achieve, will be achieved without pump cavitation (to eliminate structural damage) or other things occurring with the pump itself. We want to make sure because this is a permanent system.”

Designs fluctuate depending on the pump, says Pepple.

“For every pump, there are specific requirements that you have to meet in order for that pump to operate on its pump curve – where [the pump] the wants to operate. Essentially, we have to design the system to ensure that the pump that the producer plans on using to agitate with these systems pairs up with the pipe system.”

“The high-pressure pumps are what we use for lead pumps and booster pumps that allow us to go distance,” she says. “The low-pressure pumps are typically low pressure/higher volume, so you can move more liquid but you don’t generate the pressure that allows you to push it long distances. These are the pumps used to operate agitation systems.  By comparison, most of the lead pumps and booster pumps currently being used are going to generate in the ballpark range of 400 foot a head. If you run it at full throttle you can get up to 3,000 gallons a minute out of that pump, but to do that, it requires 450 horsepower; whereas the 6,000-gallon per minute pump, will only generate about 80 feet to 120, but only needs 300 horsepower. So, it doesn’t create near the amount of pressure, but you get much higher volume for less horsepower. This allows us to do that same amount of work as three smaller tip pumps, using a single high efficiency pump that cost less to operate.”

In the end, once the design is complete and the contractors and crew are in place, installation can go quickly. For a smaller barn, it can take a day to install and with bigger barns it can take up to two days.

“It just depends on the size of the crew that they’re running, and whether they are doing it all at once,” says Pepple.

For Fine Swine, it’s too soon for test results taken in the fields. Although the system was built last May, it took until this spring to build-up enough waste to pump. This spring, about 3,000,000 gallons was pumped out onto fields and Pitstick says he can already see the difference.

“You can tell as the manure was coming out that it’s definitely more consistent,” he says. “When we apply next fall, we will test it and see how it comes after a whole summer where we agitate every month.”

PCE has been monitoring some of the systems they have installed.

“We have seen consistent nutrient content going to the field for the pumping events monitored. We also tend to see a 10 to 15 percent bump in organic nitrogen, phosphorus, and total solids when compared to older facilities on site that don’t have the agitation system installed.”

With new systems, there are always lessons to be learned, especially regarding installation. Pitstick says for farmers considering it, “I think it’s a no brainer to install it, but work closely with your engineers. We put it in after we put in the slatted pit floors, then tried to work underneath the roof and that was not a good idea. It was
very hard.”

Pepple says to consider this system with new construction.

“I advise farmers that this would be something for someone putting in a new barn versus retrofitting an older barn, although people are. There is a high cost to getting your pit clean enough that you can safely send individuals down there to install the system.”

Despite any challenges, Pitstick is pleased with the system and enjoyed working with PCE.

“They know their stuff. They helped me with all the piping and where to get it. They helped design how many pipes we would actually need, what size of pipe to use, etc., because they knew the flow and those kinds of things.”

“It’s definitely a system designed to maximize the influence of the agitation pump,” adds Pepple. “It will allow Fine Swine to do whole barn agitation and get a uniform nutrient product to the field, while being able to better manage solids and deep pits.”