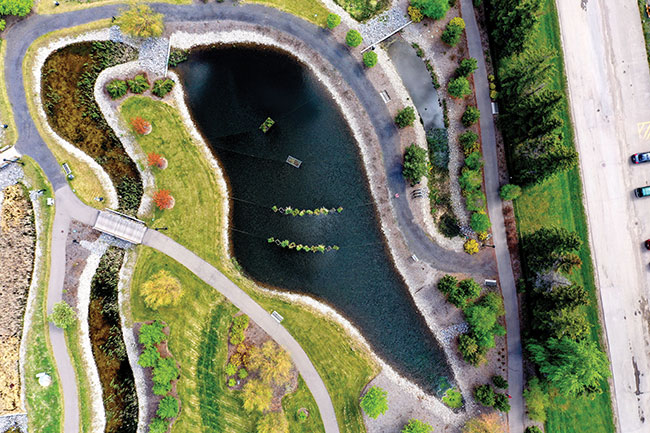 So-called “floating islands” – groups of native wetland plants in the middle of water bodies – are used to decontaminate soil and pull pollutants out of urban wastewater. Now researchers at Olds College in Alberta are testing whether those islands can also clean up feedlot runoff.

The first two phases of the study at the Olds College Centre for Innovation had researchers use a mix of sedges, rushes and cattails to remove excess nutrients – mainly nitrogen, phosphorus and potassium – from contaminated potable water and feedlot runoff water in a controlled greenhouse setting.

The third stage sees the team move from the greenhouse to the feedlot for a real-world test of the remediation technology.

“We’re looking to see if it improves that water so it can actually be used for the operations around the feedlot,” says principal investigator Daniel Karran, an ecohydrologist who studies how water cycles through different ecosystems.

“If we can apply these technologies and it works to get rid of some of these contaminants, that’s a source of water we can reuse.”

The raw material for this experiment is found in abundance in cattle-rich Alberta, where intensive livestock operations generate acres of manure that is used in agriculture but also can end up in waterways due to runoff from farm fields and catch basins.

The high nutrient loads turns the holding ponds into breeding grounds for toxic algal blooms, and the extra biomass in the water creates an oxygen-free environment that is unsuitable to most forms of aquatic life.

“It’s quite nasty. They’re very unhealthy ecosystems,” says Karran. “It’s really dirty water and a good proof of concept for this design, if it works.” 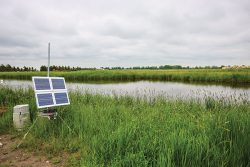 The feedlot runoff pond on campus at Olds College, which is included in the third phase of research for Floating Island Technology.

The floating islands act as a kind of natural filtration system, with the plants taking up nitrogen and phosphorus from the runoff water and adding oxygen from the atmosphere to the holding ponds through their root systems, essentially seeding the water with oxygen.

During phase three of the research trials, the plant biomass will be harvested and tested to determine the level of nutrient uptake and how the floating islands are changing the feedlot ecosystems.

In a future on-farm system, Karran envisions the plants that absorb heavy metals like mercury and arsenic being harvested and destroyed, while plants enriched by excess phosphorus and nitrogen would be eventually reabsorbed by the soil on the floating islands as the plants die and decompose.

“I think it has a lot of potential once you get it up and running,” he says of the technology. “It’s not like a wastewater treatment plant – it doesn’t require a lot of labor or inputs. It just kind of exploits nature to do what nature does best.”

Using plants to clean contaminants – a process known as phyto-remediation – is well-documented in soil remediation and more recently applied to mining operations and other settings that produce wastewater.

“Now we’re looking at scaling it up to different ag applications,” says Karran.

The first two phases of the floating island research were “very promising,” he adds, as the plants proved “very effective” at removing significant quantities of macronutrients from wastewater – in some cases up to 84.9 percent of excess nutrients. Overall, researchers said the performance of the native plant species was “mixed,” with more evaluation needed to determine best practices.

The third phase, which begins in October, will evaluate the plants’ success at removing nutrients and improving water quality in four catch basins on commercial feedlots. Researchers will also monitor concentrations of heavy metals, sodium, fecal bacteria and other elements that make water unsuitable for irrigation or livestock watering.

The research team at Olds has industry partners assisting their work, including cattle farmers who have volunteered their feedlot ponds to host phase three. 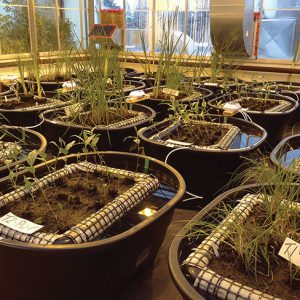 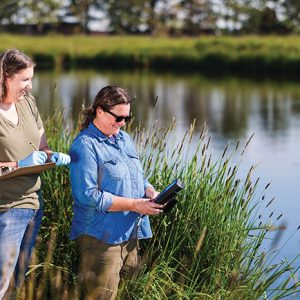 Researchers performing water samples at the feedlot pond on campus at Olds College of Agriculture & Technology.

Every drop matters
Getting feedlot water back in circulation on the farm has many potential benefits for farmers and the environment alike.

If cleaning and reusing water from feedlot ponds can reduce the amount of water farmers need to truck onto their farms, that could represent significant cost savings. As a bonus, floating islands should reduce odors and make feedlot holding ponds more aesthetically pleasing, while also working to minimize the presence of toxic algal blooms.

Floating island technology is a passive water remediation system that can be easily and cheaply installed on individual farms, eliminating the need to engineer and build expensive wastewater treatment plants and import additional water.

“We’re exploiting the natural processes of nature to try and remove these contaminants,” explains Karran. “The idea is it’s a low-cost way of making more water available on the farm for use in the long run.”

The technology has a small carbon footprint and is designed to last for decades, with minimal maintenance.

“(The islands) will just sit there doing what they do naturally,” says Karran. These potential benefits have farmers interested in the research, “with a healthy bit of skepticism… We’ll have to demonstrate that the cost of these islands is going to have a good return.”

The most important payback, notes Karran, is for the environment.

“The ag sector is the largest consumer of water in both livestock and field crops,” he says. “We’re really just going at the angle that there are better, more sustainable ways to do things. This is where we should be headed.”

The World Bank estimates that on a global scale, agriculture accounts for 70 percent of all withdrawals from freshwater sources, with better water management practices needed to meet the expected future growth in demand for food while water scarcity increases.

“The water challenges that we’re going to be up against are potentially massive – climate change, increasing competition, and just a general uncertainty with our water supply,” says Karran.

The 2020 Agricultural Water Survey, released by Statistics Canada in December 2021, found that Alberta’s 432,195 hectares of farmland receiving irrigation accounted for 71 percent of the total irrigated land in Canada. The research is in part a response to “massive mega-droughts” in the U.S. and the 2021 drought in Western Canada, which he calls “a pretty big scare” for farmers and residents. “This could be foreshadowing for the future of the Prairies,” says Karran. We need to learn how to do more with less, and that’s what this research is trying to do.”