Kentucky’s MAC Farms takes litter from 1.6 million broilers and turns it into energy 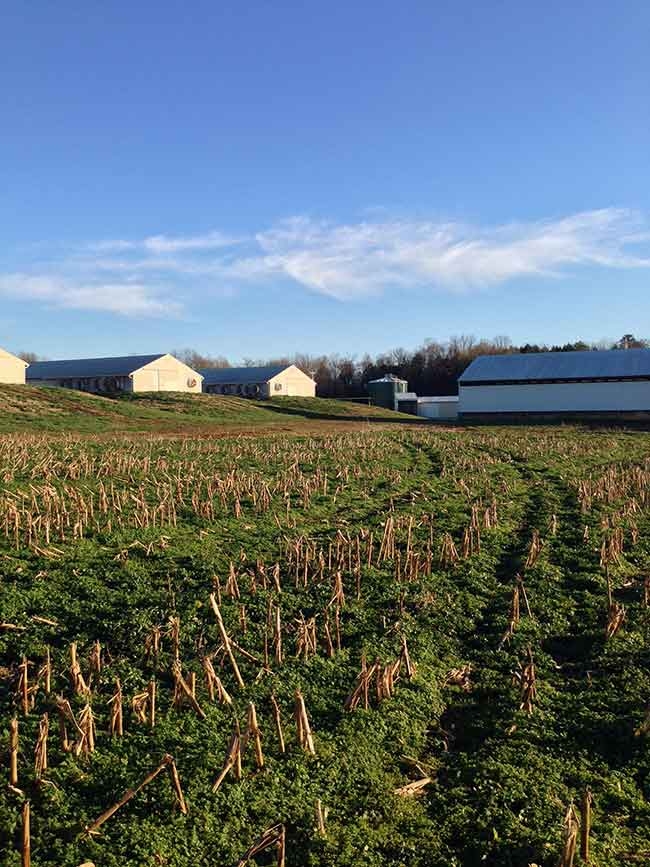 The leftover digestate – a black, thin liquid – is spread on portions of MAC Farm’s 750 managed acres. In Fall 2015, they spread about a million gallons to have plenty of room in the digester this winter. This spring, they will probably apply an additional one million gallons. Contributed photos

In 2005, John McLean went out looking for a digester to handle the chicken litter generated from the 1.6 million broilers raised annually at MAC Farms in Campbellsville, Ky. Unfortunately, McLean was a little ahead of the curve. Emerging digesters couldn’t handle the dry chicken litter.

Technology eventually caught up and around 2010, McLean started communications with Eagle Green Energy and John Logan.

“They’re really the first ones in the country that started using anaerobic digestion on poultry litter for broilers,” McLean says. “There have been some digesters for layers because that manure falls through the grates and has a higher moisture content, but broiler litter has more variables.”

In 2011, McLean officially started his journey toward installing a large-scale anaerobic digester next to his then six chicken houses. Together with Eagle Green Energy, plans were drawn for the plant and the first tank was constructed. However, that’s also when McLean hit the first major obstacle: financing.

McLean had applied for every state and federal grant he could find. In the end, only one grant came through – a $10,000 grant from the state of Kentucky, which was far from covering the cost of the nearly $2 million project.

“What I thought would happen in two years has turned into a six year project,” McLean says. “When we didn’t get the grants we stopped for about a year and then started back up in 2013. I got full financing through Wells Fargo.”

Even though Wells Fargo had never lent money on such a project, McLean said they understood the issue that the East Coast faced of keeping phosphorous from spreading into the waters.

“They have customers dealing with the litter situation, so they were excited about trying this. And they’ve been great to work with.”

Permitting
If there was a bright side, the permitting took about a year, but went smoothly. MAC Farms needed two permits from the state Environmental Protection Agency (EPA): an air quality permit and a waste permit to allow the farm to accept the waste food. The Division of Compliance assisted McLean through the process.

“In Kentucky, the Division of Compliance is basically a liaison between the farmer and the EPA. They help us with the permitting – getting the applications filled out properly, and submitting it to the EPA.”

When the EPA made its visits, Mclean says the system was new to them.

“But, once we walked them through everything, we had tremendous cooperation. They were excited about what we were doing.”

Building the plant
In 2013, McLean and his employees built the bulk of the plant and an electrical contractor was hired, along with other contractors to build some of the new buildings. And in 2014, MAC Farms also added two more boiler houses.

The two tanks work in conjunction. The mix tank and bladder are heated with a boiler that can use natural gas or biogas. The digester gas, collected in the bladder, is routed to a reciprocating engine to generate electricity. Electricity generated is then fed to the power grid and sold. In fact, the first electricity went onto the grid in October 2015.

“The digester was operating prior to October, but we just weren’t on the grid until then,” McLean explains. “We didn’t run the generator very much until we got everything in line and we had our power purchase agreement.”

Feedstocks
The road to an efficient and profitable digester has been slow and steady, and part of that is due to the generator.

The generator is producing 250 kW an hour, but it’s capable of 400 kW an hour. More energy will be produced as the farm continues to create contracts with other feedstock providers – primarily food waste companies working to avoid landfills. The companies bring the feedstock by truck or tanker and the material is deposited onto an auger where it’s then taken to the digester.

“We intend to get there [400 kw], but with an anaerobic digester you can’t make big jumps,” McLean explains. “You have to start climbing and multiply the bugs appropriately. In fact, we think we have the capability to double that if we get the appropriate feedstocks.”

The feedstocks do, however, bring their own set of variables. Every day MAC Farms feeds both digesters a base of manure. The feedstocks aren’t consistent like the manure. Temperatures can range from 50ºF to 150ºF, and the amount of solids varies too in the food waste feedstocks.

Digested materials
At the end of the process, MAC Farms spreads the final digestate – a black, thin liquid – on portions of its 750 managed acres. This past November, they spread about a million gallons to have plenty of room in the digester this winter and in the spring they will probably apply an additional one million gallons.

McLean is optimistic that the digestate will have value as an organic fertilizer.

“The phosphorus and the nitrogen are more stable and more consistent than in manure – at least our manure, which can fluctuate depending on how long the litter has been in the house, or whether it’s a complete clean out or if it’s a de-cake. But with digestate, you’ve got a consistent product that’s going to act the same way every time. Also, the digestate breaks down to such a primitive state that it’s completely available to the plant. You’re not getting any waste of your macronutrients and it’s loaded with micronutrients as well.”

McLean sees the digestate product having a broader appeal than to just farmers fertilizing crops. In Europe, the high micronutrient level and microbial activity make it ideal for land reclamation.

Handling the variables
MAC Farms averages about six flocks a year and that requires de-caking or clean out every couple of months. They store the litter and it composts until it’s ready to be used. At the moment, MAC Farms is using about half the litter generated in the boiler houses to feed the digester and the rest is either sold or spread on the farm.

There have been times when they have needed to use all their manure, but McLean says that’s not ideal because they can’t control the moisture content. More solids mean more gas.

“I’d rather have a dry product and then add moisture the way we want to versus putting something in that has a high moisture content and you don’t have any control over it.”

When it comes down to it, McLean says everything about running a digester is dealing with variables.

“In my opinion, there are so many variables in having a successful digester that if you’re not willing to intensively manage them – weather, feed stocks, humidity, solids, pH, machinery issues, and more – it’s not going to work.”

Learning process
McLean says it’s been a long road with plenty of obstacles and setbacks since they started down this path, but it’s also been an education-filled journey.

“We learn something every day,” he says. He’s speaking for himself and manager Brian Hayes, who has been with McLean for almost 12 years and manages the digester and the chicken houses. “Even when we think we’ve got the tiger by the tail, something crazy happens and we think, wow, that’s a new one on us. It’s just amazing. Again, there are just so many variables.”

The journey may have been rocky, but the future looks bright. As more feedstock contracts are signed, expansion is planned. In fact, McLean has plans to add an additional bladder.

“If I do that, I’m going to stockpile daily our feedstock and then just feed it once. But that’s probably a year or two away.”

McLean says if someone is considering an anaerobic digester they have to be passionate.

“Obviously, it has to make monetary sense, but every system is a little bit different. Because of all the variables, you have to be 100 percent on board for all the right reasons, not just one. It’s like a child. There will be times when it will drive you bonkers, but it also has to be important to you that you’re doing something positive.”

McLean has gotten some kudos for his efforts. He received the 2015 Ag Person of the Year award from the Taylor County Cooperative Extension Service. McLean gives some of the credit to an “old timer” who took him aside when he got into the chicken business in 2003.

“He said, ‘I’m just going to give you one piece of advice, and if you remember this you’ll be okay. People smell with their eyes.’ And we’ve always strived to do that,” McLean says. “We want our neighbors to look at us as an asset.”