Study examines use of recycled manure solids as bedding source 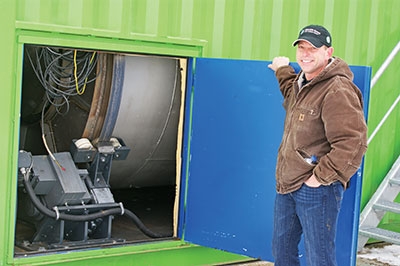 One method of recycling manure solids examined in Dr. Marcia Endres’ study was by using a mechanical composting system, similar to this Bedding Recovery Unit in place at Grandview Dairy in Wisconsin. Sharon Kauk

For Dr. Marcia Endres, comfort is king when it comes to dairy cattle.

The University of Minnesota associate professor of dairy science and veterinarian recently discussed the findings of a one-year field study she and her colleagues did of 38 dairy operations in the Midwest that use recycled manure solids as bedding.

“In California, they have used manure solids for the past 40 years,” she said, adding that state’s dairy cattle also have low somatic cell counts and appear to do well on the bedding. “However, it’s much more arid there and we here in the Midwest have a different kind of climate.”

A quick review of the available literature by Dr. Endres showed that research data examining the use of recycled manure solids on dairies in the U.S. Midwest was not available. In light of this, she worked with her graduate student Adam Husfeldt – currently a dairy producer in South Central Minnesota – to gather information on the use of recycled bedding at dairy operations in Wisconsin (26), Minnesota (6), South Dakota (4) and Iowa (2).

“A nice thing about manure solids is it’s a very green technology,” she said. “Organic bedding sources such as straw, sawdust and shavings are becoming more difficult to find. They are becoming very expensive. Cows make a lot of manure in a day … (they) can make the bedding for us.”

As part of the study, Dr. Endres looked at three different methods of recycling manure solids using separator technology – directly from raw manure, from digestate that has been through an anaerobic digester or by using a mechanical composting system, such as a Bedding Recovery Unit (BRU). Of the 38 operations being studied, 25 were using digested solids, nine were using raw solids and four were using composted solids.

“Some were using deep beds for the cows and some were using solids on top of mattresses,” said Dr. Endres. “That allowed us to do some analysis of welfare between deep beds and mattresses. That’s something we’ve done in the past with other types of bedding so we wanted to do it with this study to see if the results would be similar.”

On average, the studied farms bedded two to three times per week with the bedding coming off the separator at about 70 percent moisture. Samples were taken from the solids prior to it being applied as bedding and after it was used in the stalls. Analysis of the bedding showed it was composed of 80 percent neutral detergent fiber (NDF), a unit used to measure fiber in feed.

“Basically, it’s recycled fiber,” said Dr. Endres, adding some sugar and starches were also found within the solids, depending on how they were processed. “The digested is a little bit lower than the raw and the composted and that was statistically significant. Of course, the sugars and starches are used by the bacteria in the digester so you’re going to have lower concentration on that bedding than expected.”

Samples from the recycled bedding were also cultured to look at what families of bacteria are living in the solids. The most common was the bacillus species, which are a spore-type bacteria resistant to cold, said Dr. Endres. She added this particular type of bacteria rarely causes mastitis.

“Overall, we’re going to have more mastitis causing pathogens on the raw material to start with than we do with the digested or the mechanically composted material,” said Dr. Endres. “Once you put it in the stalls, the cows are walking on that bedding and they’re inoculating it. The bottom line is once you put it in the stall, there’s not as much difference (in pathogen numbers within the different types of bedding) anymore.”

When it came to somatic cell counts, Dr. Endres saw very little difference in the farms using recycled solids as bedding compared to other bedding systems studied in the past.

“From a somatic cell count perspective, recycled solids can work as a bedding source,” said Dr. Endres. “That was a little surprising to us; we expected to see more of a difference. It’s probably harder to do it with raw solids and keep somatic cell counts low but it is possible.”

Cow cleanliness, lameness and hock lesions were also examined by the research group during the cross-sectional study.

“We found that the cows in this type of bedding were the cleanest cows that we’ve ever seen in any studies we’ve ever done with free stalls,” said Dr. Endres. “I was surprised the cows were so clean.”

She added this can be misleading due to the fine material that could on the cow.

When it comes to hock lesions and lameness, Dr. Endres recommends using deep beds and fluffing or bedding more often to keep the bedding from packing.

“If I had a farm and I was using recycled solids, I’d use deep beds,” she said. “We don’t need the mattresses because the deep beds can work with this type of material.”

One area that needs to be watched closely when using recycled manure solids for bedding is floor surfaces and cow safety. On the farms examined in the study, injury was a consistent cause of cow mortality and almost twice as high as seen on sand bedded dairies, said Dr. Endres.

“Does that have something to do with floors; they fall because it’s so slippery and the floor’s so slippery they can’t get up? I don’t know.”

She added that when she talked to dairy owners and cow pushers on the farms, they mentioned that the floors can become very slippery, especially in summer.

“There’s a film that can form on top of the floor that wouldn’t be seen with sand because sand provides very good traction,” Dr. Endres said. “That’s something to keep in mind. If you’re going to use solids, make sure your floor is well grooved and you have good traction on them.”

Overall, based on the results seen over the one year study, Dr. Endres believes using recycled manure solids
as a bedding source is a viable option in the Midwest.